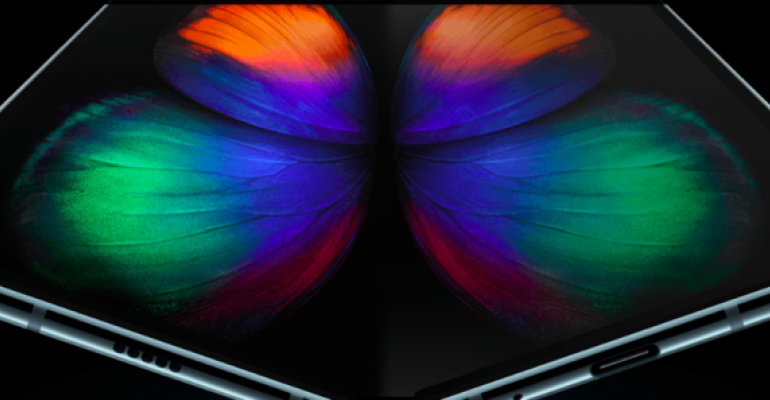 Some of the coolest mobile devices announced at MWC--incorporating foldable and 5G technology--will likely make a splash in the enterprise.

Tech watchers gathered in Barcelona this week, as one does, for the Mobile World Congress (MWC), where 5G products and foldable phones dominated the new technology announced there.

Samsung managed to combine the two trends, by announcing at the event that it will release a 5G version of its new Galaxy Fold. The Fold will be available April 26, and starts at an eyebrow-raising $1,980, through T-Mobile and AT&T.

When closed, the Fold can be used for calls and texts on a 4.6-inch display. When its 7.3-inch Infinity Flex Display opens, the device resembles a tablet. The Fold has two batteries totaling 4,380 mAh, one on each side of the display. A Qualcomm octa-core processor powers the device, which comes with an impressive 12GB of RAM and wireless earbuds. A fingerprint scanner sits on the right side of the phone. It will be available in the second quarter of 2019.

The company was also showing off the new Samsung S10, which was announced last week at the company’s own launch event. The three new S10 models will be rolled out throughout March and are available for preorder. A 5G version will be available, first through Verizon, before mid- 2019.

The Mate X, from Chinese manufacturer Huawei, was another folding model making the rounds in Barcelona. The display goes from 6.6 inches when closed to 8 inches when opened. It’s expected to support 5G and will cost--you might want to sit down first--about $2,600. It is expected to be available in the second half of 2019.

TCL, a Chinese company that makes phones under the Alcatel and BlackBerry brand names, showed off prototypes of a foldable phone it plans to release in 2020. One concept has a clamshell-like design that opens up into a larger, but not-quite-tablet-sized, screen. Another folds open to resemble a tablet, more like the Galaxy Fold. Neither is guaranteed to be manufactured for production, but, if they are, they’ll likely be much less expensive than the current foldable models.

Another eye-catching concept phone from China was shown by Vivo, with its 5G Apex prototype that has no bezel or ports. There’s no visible speaker, either. It instead uses what Vivo calls “body soundcasting” via the display. There does appear to be a small opening at the bottom for a microphone. Like the Samsung Galaxy 10, it will use a Snapdragon 855 processor.

Microsoft showed off its updated HoloLens 2, a $3,500 augmented-reality headset aimed for design and construction, manufacturing, medicine, training and remote collaboration.

The device’s visor now flips up, which should be useful for workers in manufacturing. The previous model’s Intel Atom processor has been replaced with a Qualcomm Snapdragon 850.

The HoloLens was in the news recently when Microsoft employees sent a letter to the company’s top executives because of a $479 million contract with the U.S. Army to use the device. The letter said that those who signed “did not sign up to develop weapons, and … demand a say in how our work is used.”

The employees, in a Twitter post, said the device highlighted the device’s potential benefits to “medicine, art, manufacturing. Not a single harmful use case. This is what we should be supporting.”