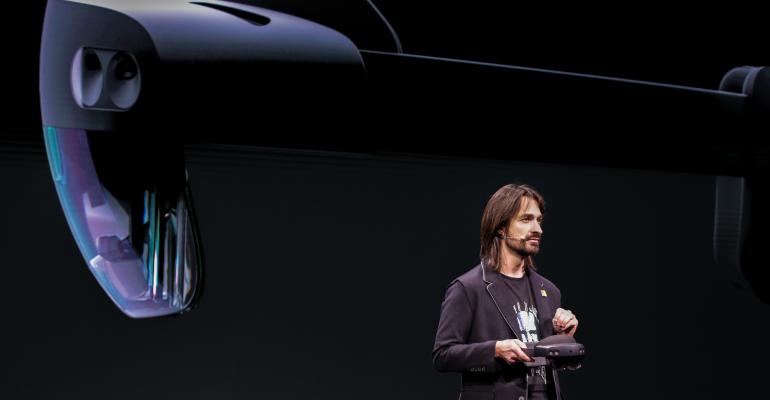 Microsoft returned to Mobile World Congress 2019 in Barcelona, Spain for the first time in three years to unveil the HoloLens 2, the next generation of the company's wearable holographic computing device.

The updated computer demonstrates Microsoft's awareness of the customer feedback it has received over the last four years, and the company has also implemented improvements in this second generation device to upgrade the user experience. Customer-requested improvements stemming from the original HoloLens included expanding the devices field of view, reducing its weight, and improving the comfort of the device.

HoloLens 2 addresses each one of these specifically:

On top of those improvements, the interaction with holograms has been improved using a new time-of-flight sensor, built-in AI and semantic understanding of how humans interact with an object in the real world and translate that into the holographic environment. That means you will still be able to use the gestures that worked with original HoloLens but also push buttons and adjust sliders all with haptic and sound based feedback. In other words, HoloLens 2 enables you to touch holograms and feel them in the holographic environment.

One new angle in this announcement compared to the original HoloLens unveiling back in January 2015 is the role of the intelligent cloud and intelligent edge in supporting enterprise and business customers through HoloLens 2.

HoloLens 2 was not the only new Microsoft product announced. The company also unveiled the following:

The Azure Kinect Development Kit (DK) -- This has its roots in the Xbox Kinect device Microsoft first built for their gaming consoles almost a decade ago. Now this new device includes AI sensors, HoloLens 2's time-of-flight sensor, a high definition RGB camera and a microphone array in a compact device. Combined together, these sensors will allow companies to develop computer vision and speech functionality using Microsoft Azure to provide capabilities to understand people, places and things around it. Key enterprise and business areas for Azure Kinect include manufacturing, healthcare and retail.

Dynamic 365 Guides -- Dynamics 365 Guides builds upon two previously released mixed reality apps - Dynamics 365 Remote Assist and Layout. If you have seen demos of the original HoloLens, where a worker uses the device to be shown how to make a repair or report an issue with someone on a Skype call, then you understand the baseline for Dynamics 365 Guides. The big difference now is that Dynamics 365 Guides provides step-by-step instructions to firstline workers on how to make repairs and explains the tools and parts they need to accomplish those tasks. This can be used for on the job training to increase the workers skills and confidence as they learn the task at hand. Microsoft is also making a PC app available that will help you create this interactive content for your own work applications including the ability to add photos, videos, and 3D models for the hands-on experience.

Azure Mixed Reality Services -- Additional cloud computing capabilities from Azure for mixed reality include Azure Spatial Anchors and Azure Remote Rendering. Both of these services will allow companies to build mixed reality apps that mark, label and retrieve various points of interests that are then accessible across HoloLens, iOS and Android hardware plus rather than using local computer power on a mobile device to render the 3D objects, they are instead rendered in the cloud and then streamed in real time to the remote devices. This is all accomplished without losing details of the original 3D object.

The three preceding products demonstrate the company's determination to make HoloLens 2 the out-of-the-box solution for industry verticals looking to incorporate augmented reality into their stack.

HoloLens 2 is available on pre-order for enterprise customers with initial availability in the United States, Japan, China, Germany, Canada, United Kingdom, Ireland, France, Australia and New Zealand. The device will cost less than the commercial version of the original HoloLens did by $1,500 with its price tag of just $3,500. Enterprise customers also have a bundle option available that includes Dynamics 365 Remote Assist at a cost of $125 per month.

I had the opportunity to try out the original HoloLens on multiple occasions over the last few years and I am looking forward to getting some hands-on time with Hololens 2 to really evaluate the overall improvements that have been made to the device.