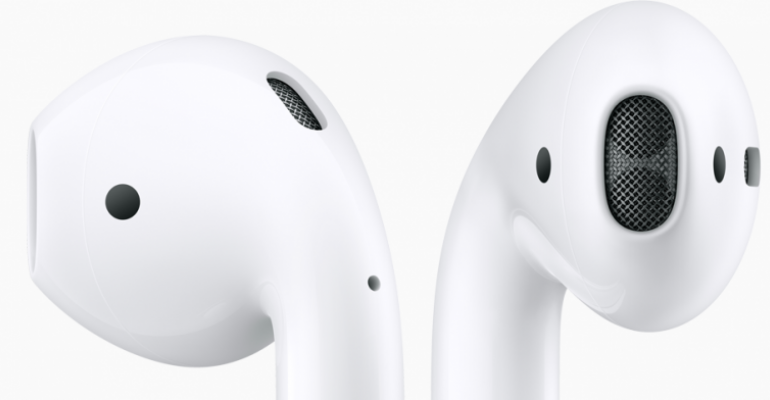 The next generation of Apple AirPods is expected to include health monitoring features.

A number of leaks and analyst forecasts suggest Apple is readying its second-generation AirPods--a.k.a. AirPods 2. The new Apple AirPods are expected to offer health features that could be a boon for employees' personal health. Other rumored updates to the earbuds include a grip coating and a choice of colors: black or white, instead of just white.

Just as Apple has increased the ability of the Apple Watch to give users insight into their health and to promote healthy habits, the company is expected to update its AirPods earbuds with features designed to get sedentary users moving and to inform them of potentially serious health problems.

Apple filed a patent for earbuds last year with biometric sensors that could be used to monitor heart and respiratory rate, oxygen saturation level and core body temperature. The sensors could potentially measure stress experienced by the user or be used like an EKG to measure the electrical function of the heart. While it's unclear which, if any, of the patent concepts will make it into the next version of Apple AirPods, one could imagine apps recording body temperature over time, alerting the user of increased stress levels, or, in the case of an abnormal EKG, warning the wearer of a potential heart attack.

Apple touts the ability of its smartwatch to collect health information users can share with their doctors. For example, the Apple Watch can take an ECG “similar to a single-lead electrocardiogram,” the company says. “The ECG app can indicate whether your heart rhythm shows signs of atrial fibrillation--a serious form of irregular heart rhythm--or sinus rhythm, which means your heart is beating in a normal pattern. The resulting ECG waveform, its classification, and any notes you’ve entered on related symptoms are automatically stored in the Health app on your iPhone.”

According to Apple’ patent, the earbuds could contain an orientation sensor that identifies in which ear the device is positioned “and adjust operation of the earbud in accordance with that determination.” For those who wear the AirPods in an office environment, the current device’s ear detection pauses music when they’re removed from the ear--for example, when the boss "wants a word."

A Bloomberg report from last year suggested the next generation of AirPods would be water resistant and also offer the ability to use the voice command “Hey, Siri” to activate the virtual assistant instead of double-tapping either earbud, as users do in the current design.

Apple has previously said it will offer a case that will wirelessly charge AirPods, and leaks of iOS beta releases appear to back this up.

The devices may also get better battery life if they adopt the less power-hungry Bluetooth 5.0, as expected, an upgrade from the current Bluetooth 4.2. AirPods now get about five hours of life for listening on a charge, and about two hours for calls.

Apple’s earbuds haven’t seen an update since they were released in 2016. Digitimes first reported that the new AirPods are expected to arrive in the first half of 2019.

According to a Gartner report, wireless earbuds are projected to account for nearly a third of electronic wearables sold by 2022, “as their capabilities expand beyond communication and entertainment.”