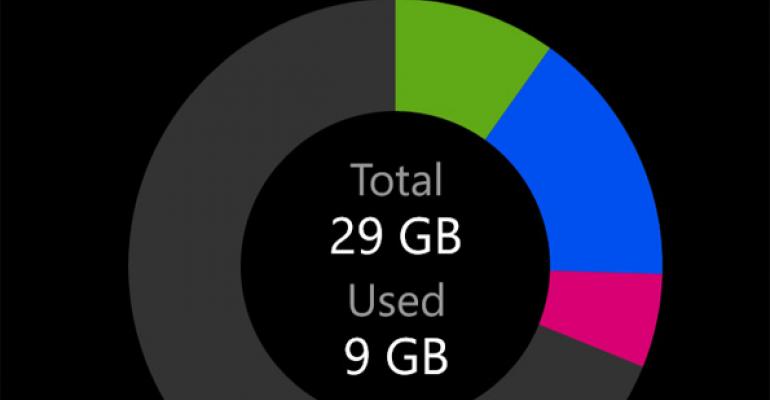 Recover storage space with this useful utility, a Lumia exclusive

With this week’s firmware updates for the Nokia Lumia 920, 820, and 620, users gain access to a useful new Nokia utility called Storage Check that helps obviate the negative effects of a recently-discovered storage bug in Windows Phone 8. If you’re using a Lumia handset, you’ll want to check out this utility after upgrading the device.

I wrote about the firmware updates yesterday in Nokia Updates Firmware in Lumia 920, 820 and 620, but should note that I saw the Storage Check utility appear on the 920 in a previous update about two weeks ago.

In Nokia, Microsoft Working on Windows Phone 8 Storage Bug, I wrote that Microsoft and Nokia were separately working to fix a storage bug in Windows Phone 8 that appears to be eating up the available space on devices. “Windows Phone 8 handsets often report that an increasingly amount of used storage is taken up by the nebulous ‘Other’ category, whose contents are never explained,” I explained. “This is particularly problematic on lower-end devices, which come with limited amounts of storage. And with a new generation of these low-end phones hitting the market now, the complaints are racking up.”

To see this, navigate to Settings, System, Phone Storage in Windows Phone 8. You’ll see a storage space graph like this:

Tap the graph to get a details screen listing how the storage is allotted.

The complaints arise from that Other entry. Users are understandably wondering what “Other” means, exactly. And more problematically, the space used by “Other” grows over time. And Windows Phone 8 offer no way to learn more or deleted that used space.

While the Windows Phone teams spins its wheels as usual, Nokia has acted decisively to address this bug with the Storage Check utility. After updating the firmware in your Lumia 920, 820, or 620, you’ll see a new Storage Check entry under System, Settings (near the bottom). This utility lets you view your storage usage and remove temporary files that make up much of that “Other” category.

If you navigate to the Details page, you can see more.

A Details button under apps lets you view storage usage per app.

And a Clear button under Temporary files lets you clear out the space used by these files.

On my Lumia 920, using this Clear button reduced the space used by temporary files from 1.2 GB to just 173 MB, for example. Pretty impressive.

Storage Check can’t cover all of the storage in “Other,” and as with a Windows-based PC, I expect that some of this usage is simply required by the system. But Storage Check is a welcome addition, especially on lower-end devices (like the 620) with smaller storage allotments. Hopefully, Microsoft will eventually address this issue for other Windows Phone users too.