Hands On with Surface Laptop and new Surface Arc Mouse 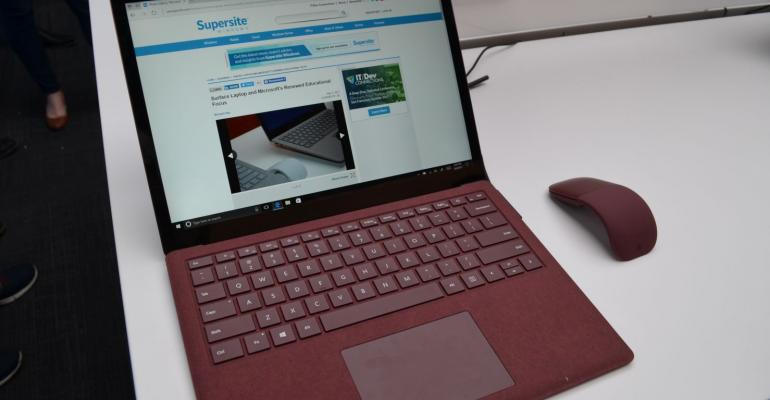 One very crowded corner of Microsoft's Education Showcase today in New York City was the far back corner where eight of the new Surface Laptops were on display alongside the refreshed Surface Arc Mouse, and several engineering articles that shows key manufacturing aspects of Microsoft newest additions to the Surface hardware line.

I waited for the crowd thin out a bit and then got my own hands on time with Surface Laptop and it is truly a beautiful device to behold.

Just like each of the previous iterations of Surface, the new Surface Laptop builds upon what the team learned and has allowed them to not only improve the manufacturing process but also the hardware itself.

Each is unique because every keyboard and its base, what the team calls the bucket, are laser cut to match each other to ensure the tightest of seams before they are bonded together.

Speaking of the keyboard and its alcantara cover - this is not your father's Surface Pro Type Cover that had a cloth texture and feel. The Surface Laptop alcantara cover has also had a layer applied to it that repels the oils off your hands so they do not collect and stain the material. It is smooth to the touch with no indication that it is a material/cloth based cover.

The screen is PixelSense based and has a microphone array on the top with a microphone on each side of the Windows Hello capable camera that is front and center. There was not camera placed on the backside of the screen for two reasons. One is to maintain the thinness at the front/top of the device adn secondly because it was decided the more likely use case would be Skype and other conferencing applications versus looking out away from the device.

The hinge is nearly invisible. It has been painted/coated so that it is not reflective and it is buttery smooth to steal a line from Panos Panay during today's keynote. I tried to get pictures of it but could not do it justice to even get an idea of how it all fits together. I can say the one-finger to open the lid without holding the base works - I did it several times.

The Wi-Fi antennas are on each side of the devices base and you will be able to see that in the gallery image of the side of the Surface Laptop.

In fact, here are the ports on the Surface Laptop:

4 - Wi-Fi Antenna - technically not a port of course, but I wanted to show you the antenna. It has a twin on the other side of the base.

The Surface Laptop is compatible with the latest Surface Dock.

When it comes to speakers, Microsoft did not want speaker grilles in the base so they created a new technology that enabled them to bed the elements for speakers under the keyboard and use the keys and cover to become the speakers themselves to create the sound. It is really impressive and a very good sound from the base. I would dare say it is much richer than many options that are out there already.

Alongside of the new Surface Laptop hardware Microsoft also launched a new update to the popular Surface Arc Touch Mouse. This one replaces the two buttons and touch strip with one large surface/button that knows when it is clicked on the left or right side and when you use your finger to slide up and down or sideways to scroll on your screen. This new peripheral will also ship on 15 June alongside the i5 version of the Surface Laptop.

So take a closer look at the images of not only Surface Laptop and Surface Arc Mouse but also some of the engineering articles they had on display to show the various design elements of Surface Laptop.

If you have any question just let me know in the comments below.