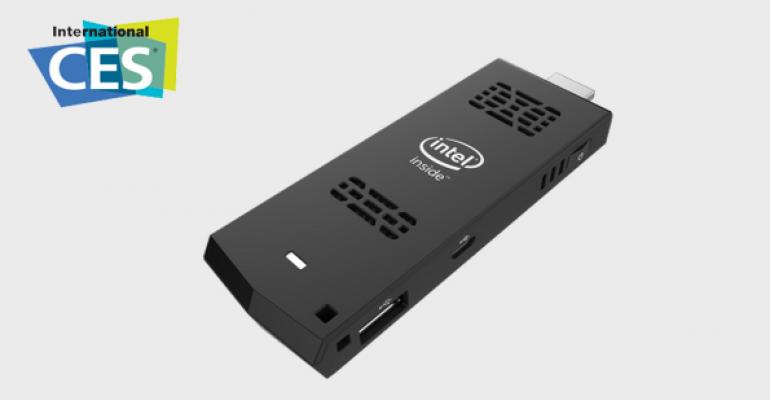 So it's not Windows To Go

Windows To Go put business versions of Windows on a USB stick, but has proven to be balky, performance challenged and pricey in my experience. But now Intel is trying a different tact: Via a new product called Compute Stick, the microprocessor giant is providing an inexpensive, consumer-oriented version of Windows 8.1 on an HDMI dongle. Does this make any sense at all?

Not really. But that's why this stuff is so much fun. :)

Plus, at just $149, Compute Stick represents a fairly inexpensive way to get Windows 8.1 with Bing, in this case, which isn't available in a standalone package. That is, the only way to acquire this Windows version is with a new PC. Which apparently the Compute Stick is.

According to Intel, Compute Stick is "a new generation compute-on-a-stick device that's ready-to-go out-of–the-box." It features a quad-core Atom processor of indeterminate type (other sources tell me it's a Bay Trail Z3735F), 2 GB of RAM, on-board storage of unknown quantity (update: 32 GB eMMC), built-in wireless connectivity (802.11b/g/n and Bluetooth), and a USB port (for a power adapter, sadly) and microSD card slot for additional storage. Plus, it's cute.

(And if you don't want or need Windows, which is obviously inconceivable, you will be able to get an even cheaper Compute Stick running Ubuntu Linux. That one has just 1 GB of RAM and 8GB of storage, and it will cost just $89.)

What would put this thing over the top is two things. Power-over-HDMI, which is an issue for any HDMI dongle. And a Windows RT/x86 version that actually worked, providing a remote-friendly interface that would make sense on an HDTV. For example, I am thinking about getting one of those new HP Stream Mini Desktop or Pavilion Mini Desktop PCs for the living room, but an HDMI dongle like this would be an interesting alternative.