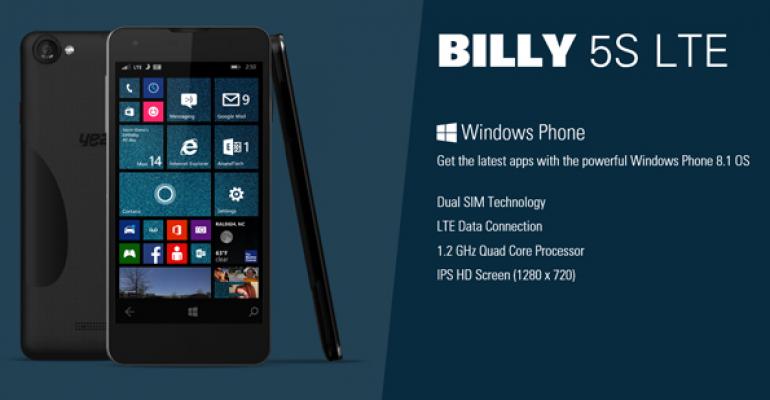 Not sure about the price yet though

OK, it's not a real flagship. But with the newly announced Billy 5S LTE, Yezz appears to be going the "affordable flagship" route first plied by Microsoft late last year. This new handset features a 5-inch 720p IPS display, a 13 megapixel rear-facing camera, and a full 1 GB of RAM. But what we don't know is what could put it over the top: Its price tag.

Yezz sells two Windows Phone handsets today, the Yezz Billy 4 and Yezz Billy 4.7.  These are both fairly low-end devices, with Snapdragon 200 processors and HSPA+ cellular networking support only. But as such, they're also affordable, if hard to find in the US: You can buy an unlocked version of the Billy 4.7 from the Microsoft Store right now for $199.00 (and that device actually has a full 1 GB of RAM, which does make it pretty interesting).

The Billy 5S LTE is differentiated from its lower-end siblings in a few important ways.

Faster/better processor. It features a mid-level 1.2 GHz Snapdragon 400 processor, and not the low-end Snapdragon 200.

More RAM. The Billy 5S features a full 1 GB of RAM, which I recommend for Windows Phone.

If these specs seem familiar, they should: They're identical to what Microsoft offers on its Lumia 830. Moving beyond the competition, we see a few additional bits that are different from the 830:

I've not yet reviewed a Yezz product, but something tells me I'll need to get going on that. This one looks quite interesting, and if it's priced accordingly—well under $300 unlocked, I bet—it could be a good option.