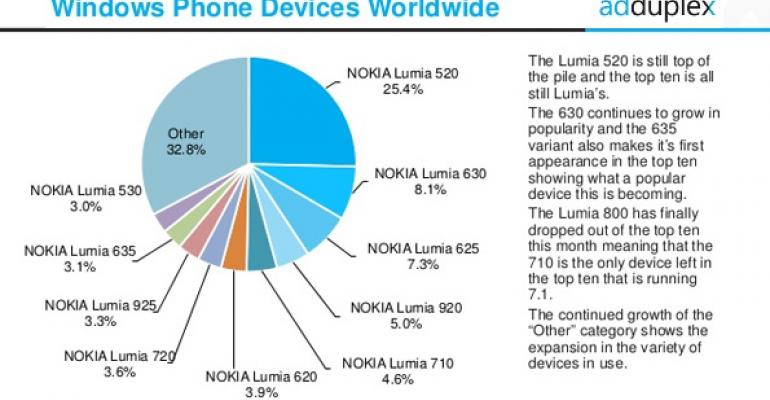 The top ten is all Lumia

With 2014 coming to a close, the good folks at AdDuplex have provided their final peek at which Windows Phone handsets are most-frequently-used around the world. This month, we see the Lumia 630/635 surging, Windows Phone 8.1 continuing its upward trend, and Cricket jumping to the number two spot for US-based wireless carriers.

As you may remember, AdDuplex bills itself as the largest cross-promotion network for Windows Phone and Windows 8 apps, empowering developers and publishers to promote their apps for free by helping each other. And each month it provides a tantalizing glimpse at which Windows devices people are actually using out in the world.

It's all Lumia. Yes, Nokia (now Microsoft Mobility) is still number one with over 95 percent of all usage. But more interesting, perhaps, is that all ten of the top ten most-frequently-used Windows Phone handsets are Lumias.

What about the rest of the market? While there are fully 30 different Windows Phone "brands" (manufacturers?) listed in the survey, 26 of those brands account for just 0.21 percent usage. In other words, statistically they don't even exist. (That said, this "Other" category did experience 50 percent growth in the month.)

Windows Phone 8.1 usage. Windows Phone 8.1 continues to be the most popular OS version worldwide with 58 percent usage, compared to 27 percent for Windows Phone 8.0 and 15 percent for version 7.x. But the mix varies wildly from country to country, and the US—shocker—is well behind the average, with just 46.6 percent of phones on version 8.1. So thanks, Verizon.

US wireless carriers. AT&T is of course the biggest wireless carrier for Windows Phone users in the US, with 28 percent usage. But Cricket has surged past T-Mobile (19.7) for the number two spot with 22.8 percent. Verizon is fourth with 13.2 percent.

New phones. Once again, AdDuplex has spotted some new phones in the wild. These are the Microsoft RM-1068, which is a Brazil-based variant of the low-end 4-inch devices we saw last month (and thus nothing to get excited about), and the LG LGVW820, which marks the return of LG to the Windows Phone market with a 4.7-inch 854 x 480 device that's only been seen in Korea so far.

Also, I'd like to address a bit of questionable data that seems to be making the rounds. Many are reporting on data from a company called Flurry (which, sorry, I've never even heard of), which claims that over 50 percent of all phone activations Christmas week were iPhones. This is not accurate for a variety of reasons—Flurry, like AdDuplex measures in-app ad tracking to obtain usage data—but the Windows Phone spin is that Microsoft/Lumia was in third place, with 5.8 percent usage, behind only Apple (51.3 percent) and Samsung (17.7 percent). I will accept this as the good news it is, but let's not get carried away.