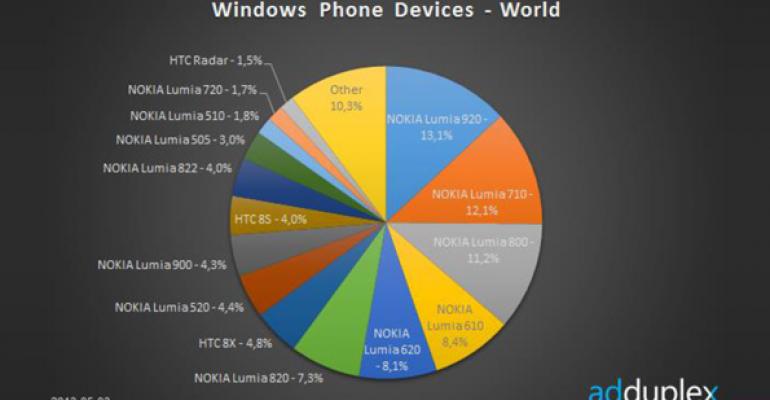 Some trends from this month’s report, which will be live sometime this week:

Budget phones surge. Last month, AdDuplex noted that it expected to see Nokia’s budget phones surge as new models like the Lumia 520 and 720 hit the market. That’s happening: The Lumia 620 jumped from 7 percent of usage last month to 8.1 percent this month. And as noted previously, the new Lumia 520 entered the charts in 8th place with 4.4 percent of the usage. (The Lumia 720 enters in 14th place with 1.7 percent usage.)

Nokia not as strong in the US. As noted in Nokia’s recent quarterly earnings announcement, the firm continues to struggle a bit in the US. So while Nokia devices control 80 percent of Windows Phone usage overall, they only account for 66 percent in the US, with HTC grabbing 26 percent (well above its global share of 13.7 percent), thanks largely to the success of the Windows Phone 8X. Samsung is the big loser here, falling to 4.5 percent usage worldwide and 7.3 percent in the US.

New unidentified devices. As is often the case,AdDuplex notes the arrival of some mysterious new Windows Phone handsets in this month’s report, in addition to frequent sightings of the Nokia RM-(Lumia 928), due for imminent public release. New hardware this month includes the SAMSUNG SPH-I800 (720p screen, most likely a version of ATIV S), Nokia RM-941 (WVGA display), Nokia RM-910 (WXGA), and Nokia RM-875 (also WXGA).