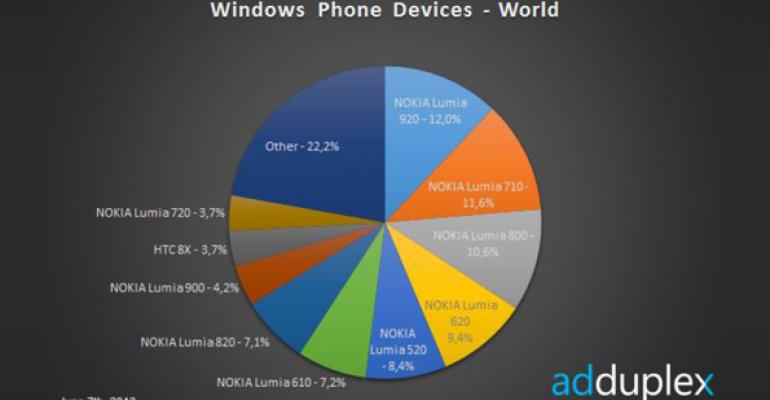 Some trends from this month’s report, which will be live tomorrow, include:

Nokia Lumia 620 and 520 are surging. While the top three Windows Phone handsets worldwide (Nokia Lumia 920, 710, and 800) remaining unchanged month over month, the remainder of the top five is now occupied by two fast-surging newcomers. The Lumia 620 hits at number four and jumps to 9.4 percent usage share, while the Lumia 520 rocketed to number five with 8.4 percent usage share. The message? Nokia’s strategy of creating high-quality but inexpensive low-end devices is working.

Nokia makes slight gains. I noted last month that 80 percent usage seems like the natural plateau for Nokia overall as they’d been stuck at that figure, roughly, for several months. But this month, Nokia actually jumped somewhat to 83 percent usage, largely at the expense of Samsung. HTC also made small gains at Samsung’s loss. My take: Samsung is quickly becoming an also ran after making some of the very best Windows Phone 7.x handsets.

Nokia is actually coming on strong in the United States. In the past, the story was that Nokia wasn’t as competitive in the US as it was internationally. But if you look just at Windows Phone 8 handsets (the “now” as opposed to the “past”), something interesting emerges: In the US, fully 77 percent of those phones are made by Nokia, with HTC pulling in 22 percent and Samsung drifting off with just 1 percent. So it's almost identical to the full world market. (Note: These figure were updated by AdDuplex and were previously a bit different. --Paul)

Verizon trumps AT&T. With the release of the well-received Lumia 928—see my review—Verizon Wireless has pulled ahead of AT&T with 43 percentage usage among Windows Phone users (compared to 39 percent for AT&T and 14 percent for T-Mobile.) That said, T-Mobile just got the equally well-received and budget-priced Lumia 521, so next month could be interesting too.

New unidentified devices. As is often the case, AdDuplex notes the arrival of some mysterious new Windows Phone handsets in this month’s report, and one of them, this month, is coming to Sprint users. These new phones include the NOKIA RM-955_apac_prc (China, WXGA screen), NOKIA LC4301 (test device running Windows Phone 8.1), NOKIA P5238 (test device), HTC HTCPO881 (aimed at Sprint, with WVGA screen), HUAWEI H887L (US and China, WVGA screen), HUAWEI W2-T01 (a successor to the Huawei W2, WVGA display), and the SAMSUNG SGH-I187 (Korea and US, 720p screen).