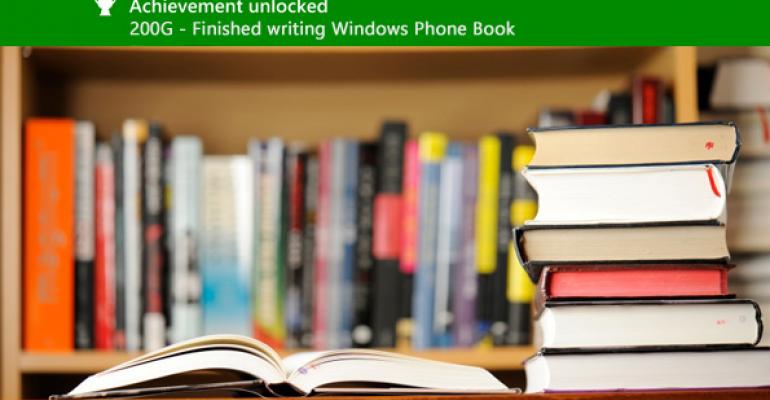 It took a lot longer than expected and survived a mid-stream course correction, but the initial shipping version Paul Thurrott's Windows Phone 8 is now complete. This e-book is free and is my gift to the Windows Phone community.

There is still a lot of work to do, and I’ll be updating this book soon to add information about Nokia’s HERE mapping and location apps and other content. Today, however, I’d like to look back and examine my goals for this project and discuss what went well and what didn’t.

Generally speaking, I’m happy with the book. But it look a lot longer than expected, and this slow a pace isn’t sustainable. I should be able to crank out a book of this length in well under 6 months. But depending on how you measure things, Paul Thurrott's Windows Phone 8 required 7 to 9 months of writing. (Granted, this was in addition to my day job. But that will always be the case.) The solutions is simple: Either write more quickly or write less (smaller books).

I announced plans for what was originally called Windows Phone Book on August 27, 2012. In that initial post, I discussed a few goals. They were.

Write a “sequel” to Windows Phone 7 Secrets. “Not a direct sequel—I can’t/won’t use any of the material from that book or my SuperSite articles for the book—but rather a spiritual sequel, one that covers Windows Phone 8 to the same level of detail as that previous book did for the original version and in roughly the same length.” I feel like I certainly did that.

Self-publish. “For this book, I’ll write it as before. I will come up with a vague schedule of sorts that I know I will miss. But this time, I’m going to publish the book as I write it and invite readers to submit feedback. I will incorporate that feedback into the book as it’s written. As Windows Phone 8 changes, potentially, over the course of its development period, I will update the book accordingly.” I’ve certainly done that as well.

Rethink the way a book is written. “Not just the text itself, but the basic layout or structure of the material as well. I’d like to revisit the way this is done too. Instead of sections and chapters, maybe we have smaller pieces about features or scenarios.” Oddly enough, that all came to fruition as well: Part-way through the writing process, I switched to a more efficient task-based format that caused me to go back and rewrite previously completed chapters.

Public transparency about the book and how it’s written. “There will be a broad and public discussion about this book and how it evolves. This will happen at a new web site, Windows Phone Book, where I will begin posting a preliminary table of contents for the book and then individual chapters.” Obviously, that happened and I started co-posting updates to the SuperSite as well. Over the course of 9 months, I published over 100 revisions to the book as I wrote it and over 80 blog posts discussing these updates and other information about the book in progress.

Free forever and available while it’s written. “The book will always be free for anyone that wants it. You will be able to download it at any time in its development in whatever state it’s in at that time.” Mission accomplished.

Format availability. The book would be “available in PDF at least, but over time there will be various eBook formats (Kindle, Nook, Apple, whatever), and native app versions for both Windows Phone and Windows 8. Maybe those versions gets interactive, with videos and so on.” So far, I’ve only delivered a PDF version of the book. I’ve investigated publishing on Amazon and native app versions, and will have more info about that soon. But this is an area where I’ve not done enough.

I received a lot of great feedback early on, less so as the months wore on and I started pushing out more and more chapters and updates. I developed different versions of the Table of Contents (TOC) over time and sometimes changed things dramatically. I dropped chapters, content, and sections.

I started actual writing in mid-September 2012 and experienced about a two-month period of downtime while I worked on a much shorter free e-book about Xbox Music in which I experimented with the task-based approach I then adopted for this book too. (That explains the “7 to 9 months” thing above.) I figured that would let me bring this book in around 500 pages vs. about 1000 projected for the original version. (It came in almost 650 pages including a detailed TOC, and will only grow in the next month.)

From March 2013 through July 2013, I pretty much worked on the book regularly each week. Not every day. But something each week. There were a few exceptions, like the week I went to Build, but it was pretty consistent.

The end result, at least in 1.0 form, is over 635pages long with over 90,000 words and 926 screenshots if you exclude the TOC stuff. Without those shots, it’s less than 250 pages long. That’s actually 50 pages less than Windows Phone 7 Secrets, which like all of my previous books was written without in-place screenshots, but given the requirements of noting them in the documents, I bet the length is roughly the same. (Plus I’ll be writing more soon, so I suspect this new book will ultimately be longer overall.)

So it’s not that long. It works out to about 35 manuscript pages per month, or less than 10 pages per week. Obviously, I can write faster than that. (I wrote Windows Phone 7 Secrets in under two months, for example, though that was pretty grueling.)

So, what could I do better? What would I like to change going forward? Lots. Speed is the big thing, and this is an area where having an editor from a publisher breathing down my neck was actually missed, sort of. Book writing is a solitary process, and I would have enjoyed working more closely with Rafael, as on the Windows books. Maybe the next one. And I was hoping for more reader interaction, though to be fair it’s probable that doing so through the comments section of a blog maybe isn’t the best approach.

I’ll be revisiting and revising these goals for the next book—and there will be a next book, starting very soon—and of course updating this one and figuring out more diverse publishing options. But first, I need a short break, which I’ll be taking this coming week. For now, at least, the book is done.

Note: Feedback is always appreciated. I will update the book regularly going forward for minor typos and additions, not just new content.