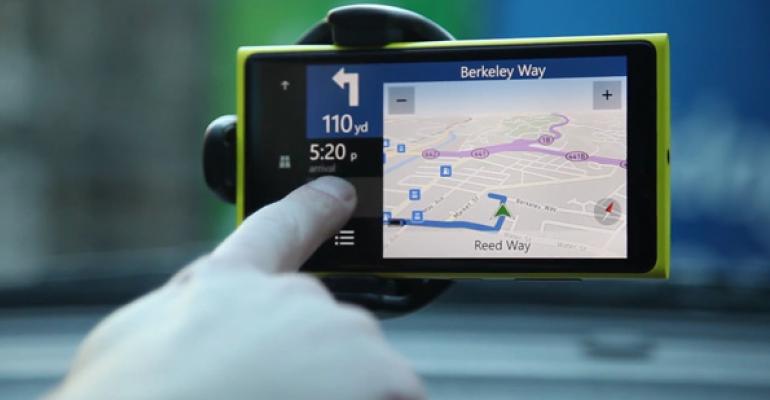 Get excited, people: This one is huge

You may recall that Nokia announced its new HERE brand in November and, at that time, offered HERE Maps only on Apple’s iOS—iPhone, iPod touch, and iPad—with plans to move it to other platforms, including Android and Mozilla’s Firefox OS. At that time, I questioned why Nokia HERE for iOS was better in some ways than the Maps app in Windows Phone. But a January release of the long-promised Nokia Drive Beta app for Windows Phone 8 did much to quell my worries.

Nokia describes HERE as “the world’s first location cloud that will deliver a location platform, location content and location apps across any screen and any operating system.” And with three new HERE apps on all Windows Phone 8 handsets, and five total on Lumia devices, all users of this platform should be twirling with delight.

I’m a bit too excited to think clearly, but here’s a good description of how these apps don’t just provide huge benefits individually but also work together.

“The new HERE experiences are connected and work seamlessly together, making it easy to transition from walking to driving to public transport as you move along your day,” Bonetti explains. “In particular, from HERE Maps you can launch HERE Drive(+) or HERE Transit if needed. In HERE Transit you now get a map overview of nearby stations and stops, and when you need walk navigation to get to the stop or to the final destination, you can start HERE Maps from there.”

HERE Maps, HERE Drive and HERE Transit are available to people with any Windows Phone 8 smartphone. HERE Drive+ and HERE City Lens are exclusive to Nokia’s Lumia devices. This is, I think, a more than reasonable approach that provides all Windows Phone 8 users—and thus the Windows Phone 8 ecosystem in general—with some huge and important advantages over other smart phone platforms while also allowing Nokia to retain some advantages for its own devices.

“HERE Maps makes getting around easier than ever, with detailed mapping on or offline, and reliable, turn-by-turn navigation in over 90 countries. A new compass shows you which direction you’re facing, and also lets you choose an angled view of your surroundings. You get expanded maps of building interiors around the world – airports, shopping malls, stadiums and more. And you can always save your favorite places for easy reference later.”

“HERE Drive Beta syncs with the other HERE apps to give you the best turn-by-turn voice guidance available wherever you’re going, even when you’re offline. Customize your drive for a faster, shorter, or more economical route, and adjust settings to avoid things like traffic and toll roads. Then, customize map layers to see relevant places all along the way, from restaurants and gas stations to local points of interest. Text-to-speech means you’ll never have to look down to know which street you’re turning on, and audible speed limit alerts might save you a ticket.”

“HERE Transit takes the confusion out of hopping the bus, train, tram, or ferry. Tap to see stations and stops nearest you on the map, then tap again for departure times. All your favorites from HERE Drive and HERE Maps are accessible, so getting to your favorite restaurant or shop is easy. And because all the HERE apps are synced, moving between types of navigation—from finding a location to transit directions to walking navigation—happens in just a tap or two.”

Availability: Nokia Lumia handsets (plus paid upgrades for other users when out of beta)

This is HERE Drive with global navigation capabilities.

City Lens utilizes “LiveSight, a technology that integrates sight recognition with live map information. LiveSight is a UI revolution that uses sight (instead of keyboard, touch screen or voice) to interact with your smartphone … When you are taking photos with the Place Tag lens, your Lumia will capture the image and also record the Points of Interest (POIs) that are visible in the viewfinder and the name and address.”