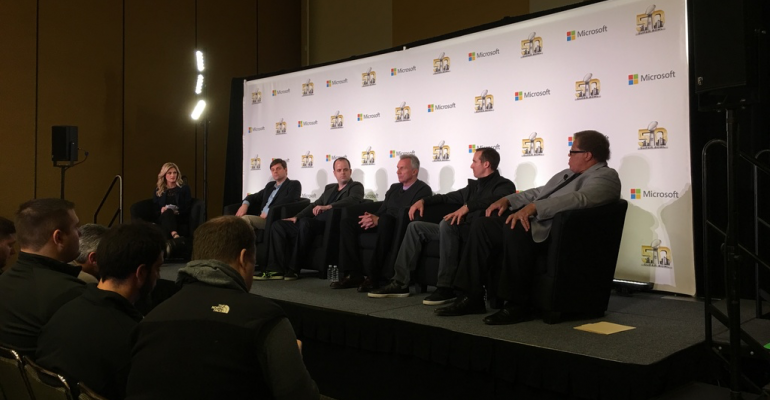 The Future of NFL Football: The Game Will Come to Your Living Room

If you think NFL players like Cam Newton are impressive on television, wait until they crash through your living room wall.

That’s the vision the league and Microsoft laid out during a “Future of Football” panel on Tuesday, bringing in NFL great Joe Montana, quarterback Drew Brees, and Fox analyst Erin Andrews to chat about how the game may change over time.

The talk included a video with rowdy fans all wearing HoloLenses during a game, but the action wasn’t constrained to their television. Seahawks quarterback Russell Wilson threw a pass inside the room. The viewers used pinch-to-zoom gestures  to examine the different parts of the action, which was displayed in 3D on their coffee table. They weren’t just watching the game - they were practically in it.

“It isn’t just if, it’s when,” said Brian Rolapp, the executive vice president of media for the NFL. “This stuff is coming.”

Montana said that even if it’s many years off, he welcomed the advent of such innovations as it could help fans better understand what players experience.

“It would be great if you could see what the quarterback is actually looking at,” he said. “Or if there's away to have an understanding of what he's trying to see. There's just no experience like it - if you could give a fan that experience they'd want to play the game. It's the funnest thing I've ever been around.”

Brees, who just wrapped up his 15th year in the league, echoed those remarks.

“What fans would be surprised at is what’s it’s like if they could literally looking through my eyes,” he said. “I'm sure no less than 20 times a game they'd think ‘why did you see that and why did you throw it to that point?’ Well that receiver is just supposed to be there. I trust my guys to be there.”

Not only did the panel discuss player performance, but the size and speed of the athletes. Andrews said putting players virtually in your living room would bring a whole perspective that’s not possible on television.

“I feel you don’t understand how big some of these guys are until you’re actually standing next to them,” she said.

SURFACE: IT WILL REMAIN THE KING OF THE NFL TABLETS

The most visible technology that fans can see in every game is the Microsoft Surface devices. You know, the ones erroneously blamed for a malfunction in the AFC Championship game when the actual culprit was network connectivity.

Brees said the Surface tablets have improved how he can communicate with players, as he’s able to instantly work with receivers to adjust their routes. His biggest wish list item for the Surface tablets is video, which would add in another dimension of analysis.

Mike Nichols, the corporate vice president of marketing and CMO for Xbox, said the technical capabilities for video analysis have been worked out, but allowing this is now in the hands of the NFL’s competition committee, as their job is to ensure it could be implemented fairly for all teams. The demostration and discussion of video capabilities are part of the ongoing collaboration between Microsoft and the NFL, who were both happy to highlight the partnership and how it might more directly engage fans. Reggie McKenzie, the general manager of the Oakland Raiders, lauded Microsoft for making the tablets robust in inclement weather. He cited rain and sunlight as some of the first challenging weather elements players experienced when they transitioned to the Surface.

“They jumped right in and made it weatherproof,” he said.

It’s a far cry from when Montana was playing - he recalled black-and-white pictures and sitting through hours of film to dissect gameplay. It certainly feels dramatically different compared to how Microsoft has directly impact real-time analysis with the Surface.

“One of the coaches’ favorite thing to do was to stick money between the layers of film to see who was watching it,” he said.