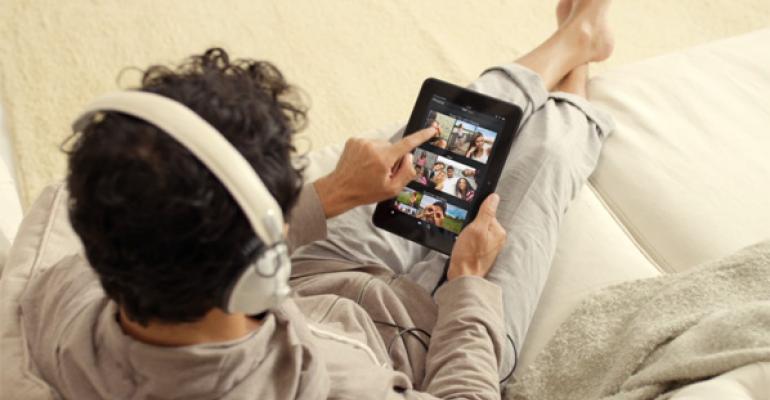 The Amazon Kindle Fire HD 8.9 is—wait for it—an 8.9 inch version of the Kindle Fire HD. I know, I know. You were looking for something more profound than that. Sorry, but it really is that simple.

This device has triggered more introspection than actual usage, so bear with me for a moment. It’s not that there’s anything wrong with it—far from it, in fact—but rather that the Kindle Fire HD 8.9 speaks volumes about the content ecosystem for which it is a front-end.

Where a typical Android tablet—like the Google Nexus 10, which I’ve not reviewed—or an Apple iPad (the full-sized version, not the iPad mini, both of which I did review)—can be considered a true hybrid device, or what we may call the general purpose computing device of the near-future, the Kindle Fire HD is no such thing, at least not yet. Instead, the Kindle Fire HD—both the 7-inch and 8.9-inch version—is a consumption device, something you’ll use for entertainment: Rented movies, TV shows, Kindle and Audible books, and digital music.

Nothing is truly that black or white, of course, and, yes, there are productivity apps that run on the Kindle Fire HD 8.9. Yes, you can connect a Bluetooth keyboard. And yes, you could use that keyboard to enter text into a word processor, web-based blog entry form, or whatever. Theoretically. And while it’s not fair to say that no one is ever going to do that, let’s be honest here. No one is going to do that.

(For the record, yes, I did do both of those things.)

So what we’re left with, then, is a basically 9-inch device, a full-sized tablet, that is a front-end to Amazon’s extensive and worthwhile collection of digital content. It’s the 8.9-inch version of the Kindle Fire HD.

Depending on your perspective, that’s either good or bad.

As I noted in my most recent What I Use post, from November 2012, the (7-inch) Kindle Fire HD, which I reviewed back in September, is now my daily-use tablet. I use this at home to read two newspapers (through the Kindle software) each day and on the road to watch rented movies and purchased TV shows. I also do some light web browsing, listen to audiobooks and music, and other tasks. Whatever you call it, this is all consumption stuff, not creation. It’s a media tablet.

I happen to prefer the 7-inch size for such tablets, which doesn’t surprise me since I mused about this possibility the moment that I started using Apple’s first 10-inch iPad. The reason I like the iPad mini so much, and other 7-inch-ish tablets like the Google Nexus 7, is that the size is right … for what I do. And what I do on such tablets is, again, consumption not creation.

Now, there are those people who will do a little bit of both. And for those people, an iPad is decidedly a better choice, even when you factor in the enormous price differential, for two reasons. First, Apple’s iPad app ecosystem is bigger and more mature than Amazon’s, and that ecosystem includes a lot productivity apps, not just games. Second, Amazon’s ecosystem is tilted very heavily towards consumable content: Games, apps, Kindle and audio books and periodicals, music, and TV shows and movies, all of which get pumped directly to the device from Amazon. Not surprisingly, there’s also a native shopping experience for finding and buying physical goods from Amazon’s store. That’s what the Kindle Fire HD is: A front-end to Amazon’s many services.

There is nothing wrong with that.

The Kindle Fire HD 8.9 is literally just a bigger version of the Kindle Fire HD, with the same body, the same materials, the same basic features. I can’t explain it, but one thing I do like better about the 8.9 is that the bezel, which looks so large on the smaller device and contributes to a weird squatness, looks better on the larger unit.

The 8.9 features the same stereo speakers as its smaller sibling, and they still sound surprisingly good. It has both a micro USB port and micro HDMI (for video-out) as the smaller unit. The device uses the same carousel-based Kindle Fire HD UI as the smaller device, and while some have complained about this, it works great in the context of its mission as a consumption device. Amazon’s content ecosystem is excellent and only rivaled by Apple’s. This is all up front and center.

Very few people will ever pick an Amazon Kindle Fire HD 8.9 over an iPad for any reason other than price. It’s a good one, though: At just $299, the 8.9 is a full $200 less expensive than Apple’s cheapest iPad, and the version equipped with 4G/LTE capabilities for $499 is an even better deal (assuming you need/want such a thing): It’s fully $229 less expensive than the comparable iPad, but that’s before you factor in the wireless plans. Apple’s, at $15 per month for 250 MB per month, costs $180 a year. Amazon’s, for the same amount of data, is $50 per year. So that iPad is actually $360 more expensive than the comparable Kindle Fire HD 8.9 in just the first year. That’s a lot of money.

That said, my recommendation is to skip the 4G/LTE option and save enough more money. If you’re going to get a Kindle Fire HD 8.9, do so knowing that it’s primarily a content consumption device and that Wi-Fi is your friend. Yes, you could try to push this device outside its comfort zone, but I don’t recommend it. Email, web browsing and possibly Facebook. But the rest of it is all entertainment, at which it excels.

I’ll be sticking the 7-inch Kindle Fire HD. I just prefer the smaller size. But if you prefer larger tablets, the Kindle Fire HD 8.9 is recommended.

Note: If you can swing it, I do recommend the Amazon Kindle Fire HD 8.9" Standing Leather Case (or, for the smaller unit, the Amazon Kindle Fire HD 7" Standing Leather Case). It adds a bit of bulk and is decidedly less elegant—but more usable—than Apple’s iPad Smart Case, and it performs the same function: Open the case and, thanks to hidden magnets, the device turns on instantly. It also works as a decent stand and of course protects the Kindle when closed. It’s a bit pricy at $55 ($45 for the 7-inch version), but I was able to get half off thanks to one of those Special Offers that Amazon haters are so quick to criticize.