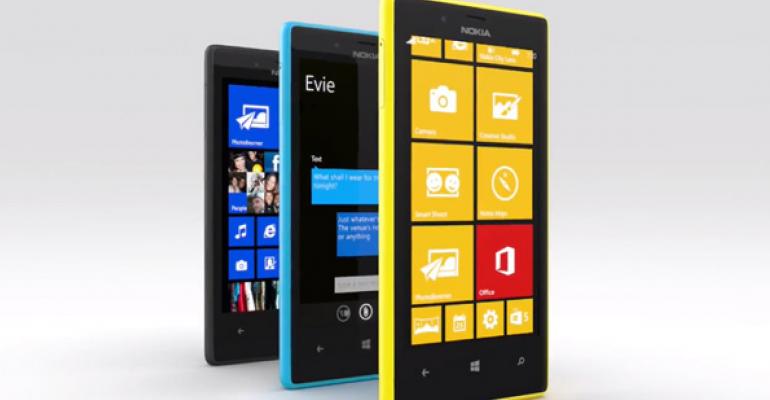 As expected, Nokia announced two new Windows Phone 8 handsets at Mobile World Congress this week, the Lumia 720 and Lumia 520. Based on the screen sizes and specifications, these devices target the mid-range and low-end of the market, respectively, offering an interesting mix of high-end features and low-end price tags. Here’s a peek at what’s new with the Lumia 720, Nokia’s new mid-range smart phone handset.

The Lumia 720 is an interesting mix, as it offers mid-range specs with high-end camera functionality. I’ll want to test this before I get too excited, but this device appears to offer some of the Lumia 920’s picture-taking prowess (albeit at a lower resolution) with something resembling the Lumia 820’s more versatile form factor. This means a 6.7 megapixel camera with an “incredible” f/1.9 aperture (“that’s bigger than almost any high-end smartphone out there,” Nokia notes), offering “the best camera experience of any midrange smartphone.” (Nokia also claims that the device’s use of curved glass is “a first at this price point.”)

From a specifications standpoint, we’re looking at the mid-market here, with a 4.3-inch 800 x 480 display, a 1 GHz dual-core Snapdragon processor, 512 MB of RAM, 8 GB of internal storage (and microSD expansion for up to 64 GB more), and that unique 6.7 megapixel camera (and a 1280 x 960 widescreen HD front-facing camera which Nokia describes as its best-ever front-facing camera).

It will be available in five colors: Yellow, red, cyan, white and black, and you can replace the device shell with other colors to customize the look. I prefer that design to the Lumia 920’s unibody design because it enables that customization and provides access for micro-SD expansion.

The Lumia 720 also supports Nokia’s “super sensitive touch technology,” which allows the device’s touch-screen to be used with “your nails, car keys or even [while] wearing gloves,” and Qi-based wireless charging via an optional Wireless Charging Cover.

The Lumia 720 will debut in March in Hong Kong, Vietnam, and Singapore, and will then be offered in other markets, including China, later in the year. It will cost about $330 with a two-year contract, though I’ve not seen any indication that this device is coming to the United States.