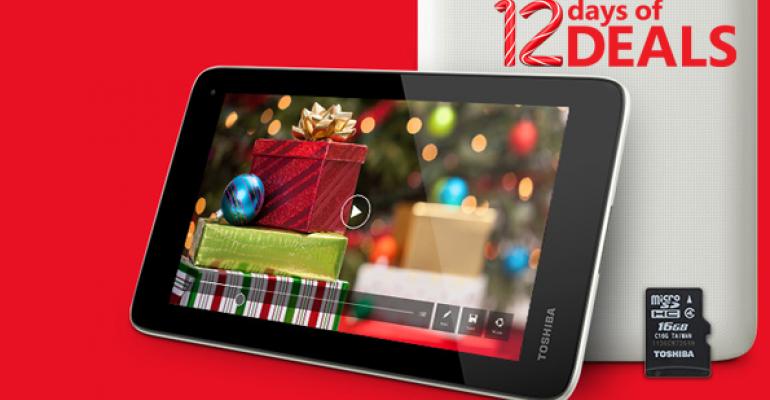 On the 12th Day of Christmas, My Microsoft Store Gave to Me...

The Microsoft Store began a 12-day promotion today, offering great deals on technology products each day over the course of the promotion. Today's promotion is now available, and we know that tomorrow's deal is a particularly good one. But you can get even better deals if you can make it to one of Microsoft's retail locations.

Yes, I believe the deals provided through Microsoft's 12 Days of Deals promotion are only available in the United States. So I'll just get that out of the way immediately. But if you can take advantage of these deals, you should at least check back each day to see what's new. (Each daily offer goes live at 8 am ET, Microsoft says.)

Today (December 8, 2014), the deal is on the lackluster Toshiba Encore Mini tablet, which I've elected not to review because of its horrifically bad screen. Screen quality aside, the deal is pretty incredible: The tablet is available today for only $79, but it includes a free 16 GB microSD card, too, which Microsoft says is a $20 value. The Encore Mini normally retails for $129, so this is pretty much a $70 savings. (And if you can make it to a retail Microsoft Store location before noon, you can save even more: It's just $49.)

Tomorrow's deal for the unlocked BLU Win HD is much better: This capable mid-range Windows Phone handset normally retails for $179, but it will be available tomorrow online for just $129. And if you get it in person—by visiting a Microsoft Store retail location before noon tomorrow—you will pay just $99. That's a steal, and either way you can choose between various colors. Check out my BLU Win HD Review for more information on that device.

But Microsoft has pointed out a particularly good deal that you may be interested in. A month ago in Microsoft Work & Play is the Uber Subscription Service You Asked For, I wrote about a limited time offer in which you could get full one-year subscriptions for Office 365 Home, Skype Unlimited World + Wi-Fi, Xbox Live Gold and Xbox Music Pass for just $199, a savings of $225 over the normal pricing if you were to pay for each separately. This Work & Play bundle is only available from US-based Microsoft Store retail locations, but if you buy this month you'll only pay $149: That's a $275 savings!