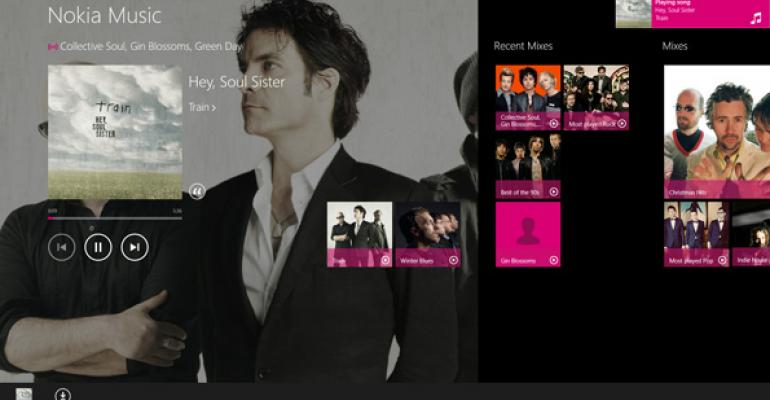 Depending on your needs, the answer may indeed be yes. To better understand how Nokia Music is positioned—or, more appropriately, the underlying Music+, let’s compare it to a few obvious existing services. Many services, such as Pandora, offer both free and paid services for streaming music over the Internet, similar to a radio station. Nokia Music does do this, but it requires a $3.99 per month subscription fee, so it’s not really the same thing: If you don’t pay for Music+, all you get are 30 second clips, rendering the app essentially useless.

Xbox Music Pass, meanwhile, is $9.99 per month. For this fee, you get streaming rights to Microsoft’s voluminous online music catalog, and it works with your Windows 8/RT PC or device, Windows Phone 8 handset, or Xbox 360. (And with Windows Phone 7.x and Windows 7, via Zune.) It also provides downloading capabilities for offline music playback, integrates with platform features like cloud collection and Smart DJ mixes.

Nokia Music edges somewhat into Xbox Music Pass territory, and because it’s a lot less expensive, it’s immediately interesting. Comparatively, Nokia Music provides the same type of streaming rights, though it’s focused exclusively on “mixes”—what Xbox Music calls Smart DJ mixes, or Internet radio-like playlists are populated based on an artist you like. So you can’t arbitrarily play an artist, a particular album, or individual songs, as you can with Xbox Music Pass.

It does, however, offer offline access—though again, only for those radio-like mixes—so you can take music with you when you don’t have an Internet connection. And if you do pay for that subscription, it’s applicable to both Windows 8/RT PCs and Windows Phone handsets; not quite as far-reaching as Xbox Music/Xbox Music Pass (which will soon add Android and iOS support too) but maybe just right, again, depending on your needs.

Nokia Music also provides a way to play your own music—that is, music files on your PC (not music in some cloud collection, a la Xbox Music), as it does on Windows Phone. Not a huge deal, but something that, say, Pandora doesn’t offer (while Spotify and Xbox Music do).

The interface is, well, awfully pink. This may be a bit of a turnoff, depending on your aesthetic leanings. I do wish you could configure the color scheme.

There are some unique touches though, including synchronized lyrics, recommendations in the Now Playing area, and a nice collection of curated mixes maintained by Nokia. And the mixes you create yourself can be based on one to three artists; with Xbox Music, Smart DJ mixes are based only on a single artist.

There are some good Windows 8 integration bits too. There’s a nice option—similar to what Music + Videos can do on Windows Phone—where Nokia Music can replace your lock screen with artist imagery during music playback. You can pin mixes to the Start screen, of course. And the live tile animates with the currently playing artist imagery.

Overall, Nokia Music looks like a pretty strong entry, assuming you’re not the type that needs to micromanage a local music collection. I’m looking at doing a deeper comparison of cloud-based music services like this—Xbox Music Pass, Rhapsody, and Spotify would fall into this as well—in the future, and Nokia Music is definitely in the mix, if you’ll pardon the pun.

Nokia Music is available in the United States, Australia, the U.K. and Ireland now and will be coming to the same markets into which Music+ has launched in the "coming weeks." If you’re in such a place, check it out: This just may be the music service you’ve been looking for.

You can download Nokia Music for Windows 8 and RT from the Windows Store.

Update: Nokia has a nice video overview of Nokia Music as well: