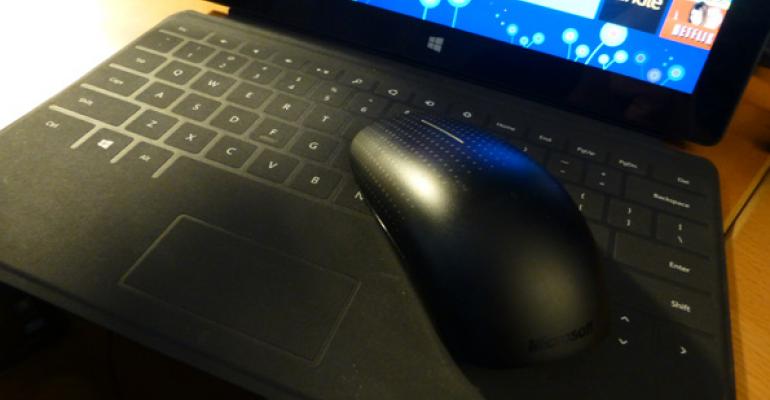 While the iPad has certain ecosystem advantages over the recently-released Surface with Windows RT, Microsoft’s entry does of course edge out the Apple device in some key areas as well. And while both Surface and iPad can work with a variety of keyboards, Surface edges into PC territory with its support of that most accurate of pointing devices, the mouse.

Note: It should also be pointed out (ahem) that Microsoft’s Touch and Type covers for Surface both included an integrated touch pad, which is of course a type of mouse.

Yes, there’s a debate to be had about where Surface fits into the increasingly complex range of personal computing devices from which we now have to choose. But it’s pretty clear that this device’s support for mice (and other pointing devices) moves it closer up the chart towards PCs than is the iPad. This, combined with other productivity niceties I’ve pointed out previously, makes Surface a better-rounded device that’s at home for work as well as play.

And the best thing about mice and Surface RT is that they just work. Thanks to effective class drivers in Windows RT, you can plug in any USB mouse and get right to work. Bluetooth is even better, since it lets you connect multiple devices at one time—keyboard and mouse, perhaps—freeing up the USB port for other uses.

I’ve thrown over a dozen mice at Surface and while, granted, most of them are Microsoft mice, they’ve always worked immediately. What you don’t get, however, is the nice Mouse and Keyboard Center-based customization software we know from Windows 8. Perhaps that’s something that will come in the future.

Remember, folks. Fingers are fine for finger painting. But when you want to get real work done, nothing beats a keyboard and a mouse.