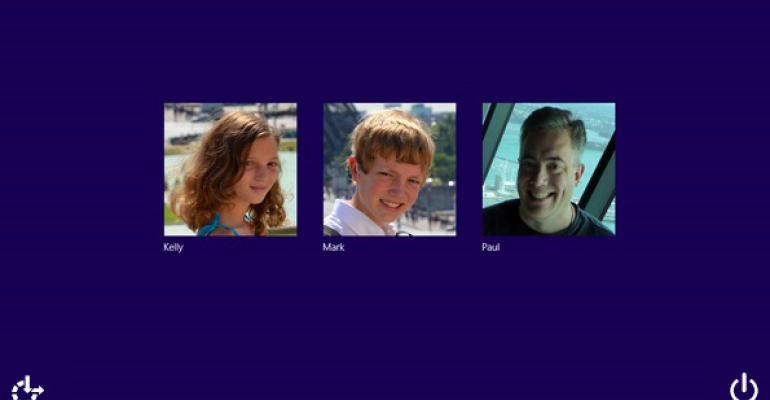 While the iPad has certain ecosystem advantages over the recently-released Surface with Windows RT, Microsoft’s entry does of course edge out the Apple device in some key areas as well. One of them is its support for multiple users.

When you sign-in to an iPad using a surprisingly lengthy and complicated first-run experience, you establish a connection between the device and your iTunes account, which opens you up to Apple’s media content and apps store. But it also binds the device to that one account. This is OK for many individual users, since it’s their iPad and they’re not sharing it with others.

But the Apple model falls apart in two ways. The first is a shared device. And let’s face it, iPads—like the Surface—are expensive, so it shouldn’t be surprising that many families buy one iPad and then share it between multiple people. But since the iPad supports only a single user account—that one iTunes account—there’s no personalized home screens, email, calendar, apps, and games. Everything is shared.

The second is when you have a family with multiple devices. And while you could allow your kids to sign in to their own iPads, iPods, and/or iPhones using their own iTunes accounts, doing so means you’d be purchasing apps and games multiple times, since each is assigned to a single ID. Apple doesn’t support the notion of family accounts, so the alternative is to simply sign-in to each device with your own iTunes account and then send your kids out into the world with the devices. If they don’t know your password, you’re reasonable safe. But it’s ponderous to OK purchases on multiple devices.

Microsoft’s Surface with Windows RT solves the first of these two problems by offering native support for multiple accounts. And while it doesn’t fully solve the second problem, the Microsoft solution still offers some advantages over the iPad.

Multiple users work in Windows RT (Surface RT as well as any other Windows RT devices) exactly as they do in Windows 8. You will generally sign-in to the device with a Microsoft account, and the first such sign-in is granted administrator privileges on the machine. Subsequent Microsoft account sign-ins, as well as new local accounts, are all created as standard users by default, not admins. And you can enable a Guest account on Surface with Windows RT, just as you can in Windows 8.

Surface with Windows RT can also take advantage of the Windows 8 parental controls feature, called Family Safety. This lets you enforce settings related to web browsing, time limits, Windows Store, and desktop applications and games, and you can receive regular activity reports via email to keep track of what your kids are doing online. (To be clear, iPad/iOS has an excellent set of parental control-like Restrictions too.)

When signed in as any standard user, you can perform any admin-level tasks via a User Account Prompt, which lets you provide your admin credentials (user name and password). This provides parents with a quick way to OK certain tasks that are normally not allowed to their children.

Windows RT’s support for multiple user accounts makes it much easier—and safer—to share a single device. The one wrinkle is that Microsoft, like Apple, ties store purchasing to a Microsoft account. So while you could allow each child to use their own account for these purchases, many will prefer to tie all purchases on the device to a single account. And you can do this, by creating individual local accounts for each child, and then linking those accounts to your own Microsoft account.

This is as safe as it is on the iPad because you can require a password to be entered before any purchase is made. And if your crafty child tries to disable this protection, they’ll be prompted for your password. Problem solved. (Assuming your kids don’t know your password. I was a bit shocked to discover last year that my kids did know my iTunes password, which is fairly complex. Apparently, they were paying attention while I tapped it in on their devices. So be careful.)

Put simply, a Surface with Windows RT device gives you the same user account richness you get in mainstream Windows versions but in a fun, iPad-like device that the kids will love. A Surface RT is no more or less expensive than a comparable iPad. But it absolutely offers a better multi-user experience.