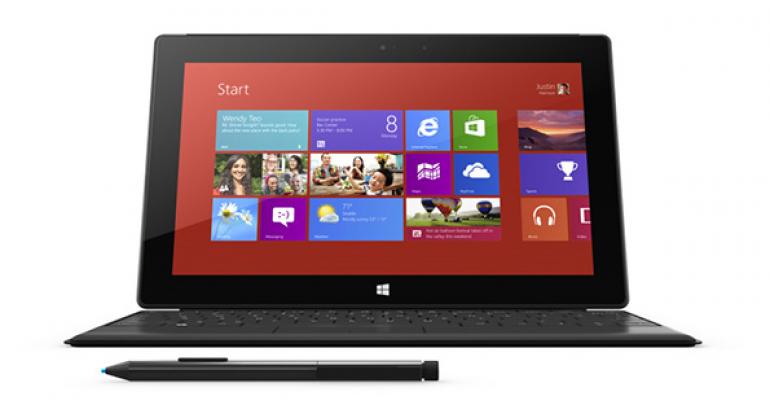 Is Microsoft about to repeat history with the next Surface devices?

With Microsoft making its promotional price cuts for Surface RT and Surface Pro permanent, many are asking me whether now is the time to buy. The answer of course, is no. The more pertinent question is whether a coming second generation of Surface devices, which we will refer to as Surface 2, will change this equation at all. Now, that is a good question.

First, the basics. The Surface 2 line-up will be exactly what you think it is, a Haswell-based version of the current Surface Pro and a TEGRA4-base version of the Surface RT. The Surface Pro 2 can be expected to provide better battery life and perhaps make the unacceptable (4.5ish hours of battery life in the original Surface Pro perhaps tolerable (7ish hours). As for Surface RT's replacement, Surface 2, the only real problem new hardware can solve is performance, and we'll see how that goes; I can say that this new device won't change the already-excellent battery life of its predecessor, and of course the issues with the Windows RT ecosystem are still legion.

From a form factor perspective, I don't expect any meaningful differences. Microsoft will want these devices to be as compatible as possible with the accessories they've already made, so you can expect the configurations to look/work identically to the devices' predecessors. (The good news for current Surface RT/Pro users is that new accessories introduced alongside Surface 2 should work just fine with the original devices too.)

So no big surprises. Given all this, the big issue with the Surface 2 generation, I think, is the price. This has to be a primary consideration. And I'm not sure that Microsoft can be counted on to bring the current pricing forward to the Surface 2 lineup. Consider the two possibilities: The current Surface price cuts are indeed permanents, but only for that first generation of devices, with the Surface 2 lineup being introduced at the same price levels as we saw last year. Or the current Surface price cuts are indeed permanent, with the Surface 2 devices starting at these new price levels and any remaining gen-1 devices being discounted even further while supplies last.

Which do you think is more likely?

I'm not sure—indeed, I have absolutely no idea how Microsoft intends to price Surface 2—but I think the success of this platform hinges on this vital question. I've written in the past about how the netbook destroyed PC price points and artificially raised Windows PC sales for several years. And one of Microsoft's key goals with both Windows 8 and Surface is to raise that average selling price by pushing more complex and expensive multi-function devices into the market as traditional PC replacements. The new netbook, as it turns out, is any non-touch-based PC; they're cheap and readily available right now.

And that's the problem: While some customers may desire a Surface or similar hybrid device, the high prices drive many to lower-end ("new netbook") non-touch PCs instead. So simply releasing Surface 2 at the same price point as its predecessor won't work. Surely there is a happy middle ground from a pricing perspective. I would argue that that middle ground is close to, if not a bit lower than, the "new" Surface pricing we see right now.

Once you get past the price, there is another problem with Surface: One size does not fit all. And in so closely aping Apple's strategy, just years later, Microsoft has introduced an Apple weakness into the heretofore different PC marketplace, which has historically had its own advantages and disadvantages. That is, I hope you want a 10.6-inch screen in whatever color Microsoft provides. Because that's your only choice.

As a new PC maker, Microsoft cannot of course be expected to come to market with a myriad of device types, all with different form factors and in different sizes. But while the firm learns from its staged rollout at customers' expense, we're kind of stuck. There's no 13-inch screen device, there's no desktop PC with touch, there's no mini tablet. All we get are two nearly identical devices, one running Windows RT and one running Windows 8.

With Surface 2, we'll finally get a mini-tablet—hey, it's only one year behind the iPad mini, which was itself late to market—and we'll get more accessories. But a mini tablet is a consumption device, not a PC. And 10.6 inches on the mainstream Surface 2 devices is going to be tough for many, especially with a 1080p display crammed into that small screen.

What Microsoft should be doing is following the PC model, not the Apple model. That means choice, not lack of choice, and no offense to Microsoft, but it can't dictate what people want in the way that Apple can. It shouldn’t even try. And all it has to do is look to Nokia to see how that close partner dramatically expanded its own hardware options to great effect. This is the model that works in the commoditized part of the market. It is the only model that will work on the PC side.

Basically, I see an evolved lineup of hardware coming from Microsoft this fall and nothing to get all that excited about. And that worries me: At a time that Microsoft should be leading, the firm is simply following Apple into a market years later. And it appears to be doing that again with Surface 2. This isn't a recipe for success, it's a recipe for irrelevance. It's what doomed the Zune, which was also excellent and well-made but a day late and a dollar short. It will doom Surface 2 as well.