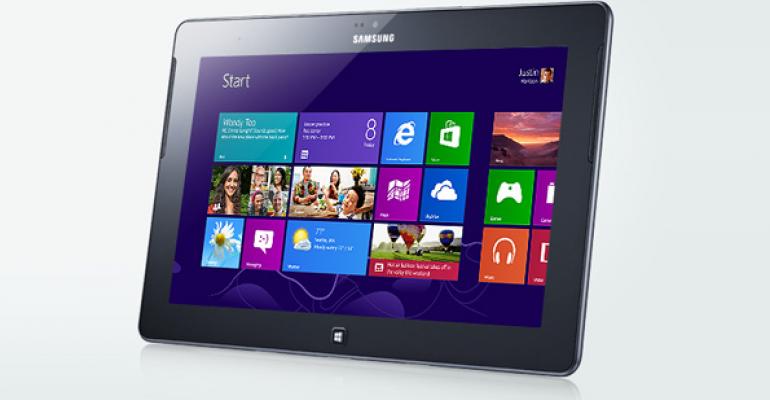 My first Windows 8 tablet with Atom inside!

My first Atom (Clover Trail) based Windows 8 tablet has arrived. And while I can’t yet offer opinions on performance yet, here are some first impressions—and photos—of the new Samsung ATIV Smart PC.

This is the machine I’ve been waiting for.

No, not this particular machine. Just one that is based on Intel’s new Atom (Clover Trail) chipset. Here’s the story if you’re not keeping score: With Windows 8, Microsoft is supporting two major chipsets, the traditional Intel chipsets (x86/x64) and, new to Windows 8, certain ARM chipsets. The ARM version of Windows 8, called Windows RT, purportedly offers better battery life and thin and sleek form factors when compared to Intel-based systems. They provide smart phone-like power management functionality, with instant-on performance. And systems based on ARM don’t require any fans, so they’re much quieter.

Sounds like a no brainer? Not quite. On the flipside, ARM-based Windows RT devices aren’t compatible with the thousands and thousands of classic desktop applications out in the world, so no iTunes or Photoshop. And no browser plug-ins, either. ARM systems are also far less powerful than typical Intel-based PCs, with much less RAM (2 GB is it for the first generation Windows RT devices, including Surface), a tiny amount of onboard storage (32 GB or 64 GB, typically), and generally smaller screens.

Users who need more can of course go with a traditional Intel-based tablet running Windows 8. You get better performance, but with fans. You get more power, but with less battery life. And you lose out on some very new Windows 8-era power management technologies like Connected Standby. If only there were a happy middle ground, a platform that split the difference between ARM and x86/x64.

There is. It’s called Clover Trail. Well, it’s called Atom. But the codename for this latest Atom version has a nicer name and helps differentiate it from previous Atom chipsets. Basically, Atom is Intel’s take on ARM: It offers the same 32-bit, low resources type of environment as ARM, the same power management capabilities and, hopefully, the same battery life and thin and light form factors. But—and this is crucial, I think—since Clover Trail is part of the traditional family of x86/x64 chipsets, it also offers complete backwards compatibility with all of the software (and hardware) you already own.

Maybe. My first Clover Trail system, the Samsung ATIV Smart PC, has just arrived. Like the ARM-based Surface with Windows RT, this is a 32-bit system with just 2 GB of RAM, and the version I have comes with 64 GB of eMMC storage. But as an Atom-based system, the ATIV is of course compatible with lots of software—iTunes, Photoshop, and so on—that can’t run on Surface or other Windows RT systems.

The big question is performance, but I’ll need a few days on that one. For now, I can tell you this: In unscientific, side-by-side tests with a Surface RT, the Clover Trail-based ATIV is opening Metro-style apps much more quickly than is the Surface. It does appear to be faster.

Again, this is not enough information. Its early days.

Beyond this most obvious of needs, a few things already stand out about this device, especially when compared to the Surface.

It’s plastic not metal, and it has an awful number of weird little pop-up tabs hiding ports over the USB, HDMI, and SD card slots. I don’t mind the plastic—it contributes to a very light feeling for the device, and help the ATIV feel lighter than the smaller (but thicker) Surface. But the tabs reek of cheap.

Also cheap is the packaging, which no one will confuse for Apple’s. As you can see in the photos below, Samsung really low-balls you on the box and packaging, and it’s pretty dreadful.

The ATIV comes with crapware, which is almost as bad as the advertising Microsoft builds into many of the Bing and entertainment apps it includes as part of Windows 8: In this case, it’s not much—Norton Internet Security is the worst offender—but there are also some weird application bundles, like Cyberlink PowerDVD. You know, since this tablet comes with no DVD player.

(By the way, how insidious is Norton? It actually prompts you to install another Norton product as part of its uninstaller. That is criminal.)

I’m not much for performance benchmarks, but I’ll see what I can do to actually test the performance of this machine against the Surface, not just the runtime performance but also battery life and so on. More soon. But in the meantime, here are some photos…