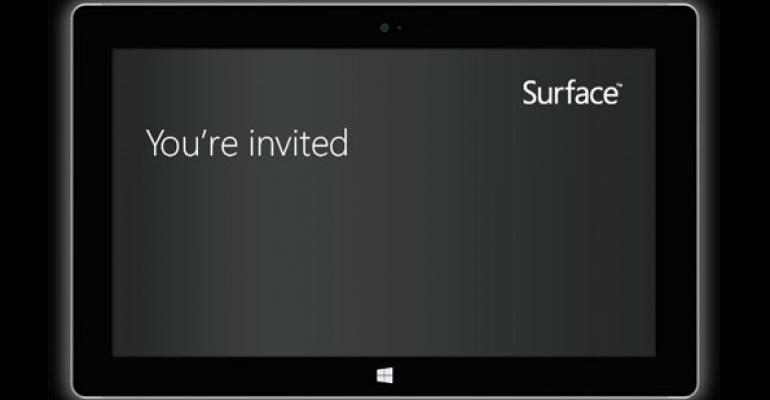 But the release won't happen until October

Microsoft will launch—but not release—its next-generation Surface 2 devices on September 23, 2013 in New York City. My expectation is that Surface 2 and Surface Pro 2 will ship at the same time as Windows 8.1 on October 18, 2013, and that the 8-inch Surface device will following shortly thereafter.

Microsoft sent invites for the press event out this morning. I'm planning on attending.

And while details of the announcement are currently under wraps, we can at least expect to see the following:

Surface 2. As discussed in Surface 2 Details Emerge, the next Surface RT device will look and work much like its predecessor but offer a TEGRA 4 processor and 1080p screen.

Surface Pro 2. This one also looks like a modest upgrade, with a Haswell-based Core i5 processor and better battery life. You can find out more in Surface Pro 2 Details Emerge.

New Surface accessories. Only the new Surface Power Cover and Surface Docking Station have leaked so far. But yes, there's a lot more coming, some cool and some kooky.

I'm hoping to see the 8-inch Surface I've been writing about—I call it Surface mini, but I'm not sure of the name—but given its launch later in the year, Microsoft may hold off on that one. I'm also curious to see whether these devices are far enough along for review units, but am guessing no. And not to be cynical about it, but given the modest nature of the device upgrades, it's not clear how much time one would need to spend with Surface 2 and Surface Pro 2 anyway. They're pretty clear cut.

See you in New York!