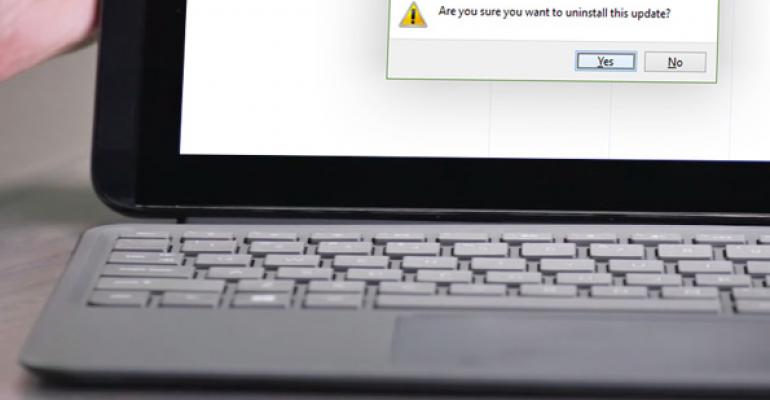 Not a fix, but the next best thing

I promise you that someday I will stop writing about Windows 10 build 9879. But for now, at least, this prerelease version of Windows 10 continues to bedevil many of the users who are testing it, including me. So here's a new update in this long-running drama: Microsoft is now offering a workaround—not a fix, but a workaround—to help get the recent and crucial update installed.

And in my case, at least, it worked: The all-important fix for those ugly and persistent File Explorer crashes has been successfully installed.

You may be wondering how to uninstall Windows Updates, and as I discovered, Microsoft still hasn't added a way to do so in the PC Settings interface. So you'll need to go the classic control panel route. The easiest way is to use Start search to look for installed updates and then select View installed updates from the results list. The Installed Updates control panel appears.

You'll be prompted to reboot, but don't do so until you've uninstalled all four in turn. After the reboot, run Windows Update—the PC Settings version works just fine—and check for updates and then install whatever it finds.

Then reboot again. Then, run Windows Update again and make sure everything installed correctly. This worked for me, and I didn't have any more updates after this reboot.

Will it work for you? I've been doing this too long to promise such a thing, but my understanding is that this should still work. I also do expect Microsoft to actually fix this issue and not just leave this workaround as the only way out. Maybe I shouldn't even expect that.

Let me know if this works. So we can all put this silliness behind us.