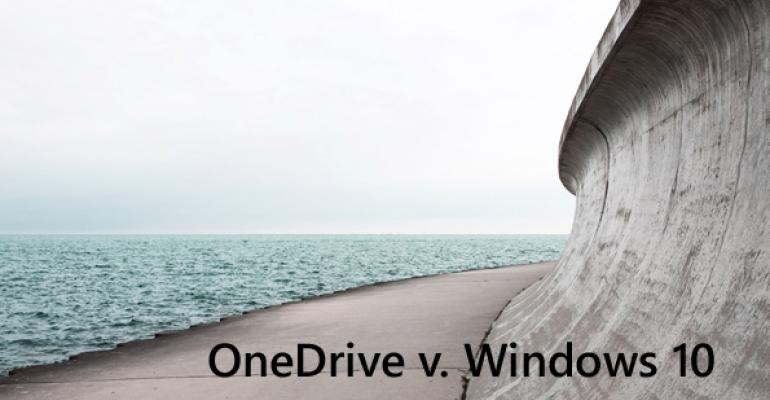 Microsoft's decision to revert OneDrive in Windows 10 to the system used by Windows 7 is a controversial one. On the one hand, the company argues that it needs to make this change so that OneDrive can be more reliable, and can more easily pick up support for shared files and better photo access. But as I'm coming to realize the more I use this system, this change severely cripples OneDrive. And surely there is a happy middle ground to be found here somewhere.

I don't want to rehash a month's worth of complaining, but here's the short version.

On mobile systems, like Android, iOS, and Windows RT/Phone, having a basic OneDrive mobile app makes sense. You can use this app while online only to browse through the entire contents of your OneDrive storage, and you can of course open documents, view photos, stream video, and perform other expected functions.

PCs and Macs—let's just use the term PCs for simplicity's sake going forward—have more complicated needs. On PCs, you can integrate OneDrive into the file system and sync OneDrive files so that they are available while offline. In this way, you can use OneDrive locations to augment or even replace local folders for documents, music, photos and other files.

The OneDrive client for Windows 7, Mac, and now Windows 10 all work identically. You can sync all of your OneDrive to your PC, if it fits, or you can simply choose which folders to sync. That way, if you have a ton of content—increasingly possible thanks to the unlimited storage Microsoft is promising to those who also subscribe to Office 365—you can simply sync the stuff you'll actually use regularly, and you can choose different things to sync on different PCs. Maybe you sync a little bit of OneDrive on a portable computer, and more on a desktop PC with a larger hard drive. Or whatever.

In Windows 8.x, Microsoft came up with an elegant solution to the "big cloud storage/little local storage" issue: It lets you see all of your OneDrive contents directly in File Explorer, but what you're really seeing is placeholder files that represent whatever is in OneDrive. If you open a file, it will sync and be available offline. But you can also arbitrarily mark any files or folders as being available offline too. I found this to be a wonderful system, and many others did too.

Microsoft tells me, however, that this system has problems. First, it confused too many people, and you can imagine the horror stories about people getting on a plane or otherwise being offline and suddenly discovering that those files they thought were on their PCs are, in fact, not on their PCs. Only the placeholders are there, and they can't open them or access them while offline.

There were application compatibility issues with this system, too, and reliability issues. And there's a hint some planned enhancements to the OneDrive sync client on PCs—access to shared files, a huge customer request—were either impossible or nearly so under this system. Whatever the reasons, you get the idea. Things had to change.

I've been happily using the placeholder system in Windows 8.x for years, and promoting its use to others. But in understanding that it had to go, I've been trying to use this new system—i.e. the OneDrive sync client that works just as it does in Windows 7 and on the Mac—in Windows 10 to see whether it meets my needs.

And it does not.

So here's the thing. It's possible that within the development time of Windows 10, Microsoft will improve this "new' OneDrive sync client in such a way that it will be OK. Maybe all it will take is having access to the Windows mobile client for OneDrive, which could/should let me (and others) browse OneDrive storage and then, as needed, make files available offline so I can get at them. Maybe. I don't know.

But the system as it now stands is untenable. And I'll give you an example of why, using my actual daily workflow.

Without a long and boring discussion about my current document management strategy, I have a set of folders under Documents in OneDrive that include Article Series (for multi-part articles series) and Work (for news and other general standalone articles that don't need to be categorized or set apart in any way), among others. In Article Series, there are folders for each article series: Windows 10, Microsoft Band, Surface Pro 3, and many others.

On my main desktop PC, I sync all of Article Series, but I only sync the most current stuff (Work is further separated in folders for each month, dating back about two years now). On a laptop, I have to be more judicious. So I will only sync some of the article series (and the most recent stuff in Work).

But it's a bit more complicated than that.

Consider the Windows 10 folder, as it's current and I'm actively writing something about Windows 10 almost every day. Not counting news stories and tips, I've written about 50 Windows 10 articles this year. I don't necessarily need all of them with me at all times, so when I go into OneDrive settings, I have some choices to make. Here's what I had chosen to sync on the laptop I'm using right now.

The problem here is that if I add folders to this Windows 10 folder on other PCs, I will never see them here ... unless I manually go into OneDrive settings, navigate down the chain of folders, and then manually select each subsequently created folder and add them to the sync list. In this case, what you're not seeing is that I have in fact written more articles in this series since I synced this machine. You can see them here, minus article number 50 (On the Road with Windows 10 Build 9901), whose attempted filing is what set this off in the first place.

With placeholders, I'd have seen those missing folders. And I'd have known that this new article was number 50 for the series.

This new system is utterly and absolutely broken. As is, it does not work. And again, I hope there is something coming that will overcome this issue. But it's going to be a rough couple of years if that's not the case.