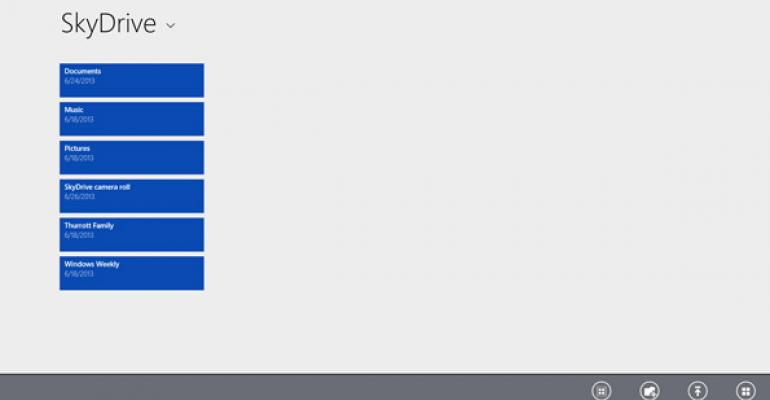 The SkyDrive mobile app that ships with Windows 8 and RT has been updated in Windows 8.1 to address a key customer request, though to be fair it was unrelated to SkyDrive: In addition to letting you browse and access files in your cloud storage, the app now provides a Metro-based front-end to your PC’s file system too.

In addition to this updated app, Windows 8.1 also provides deep integration with the SkyDrive service. Please refer to Hands-On with Windows 8.1: SkyDrive Integration for information about what I consider to be one of Windows 8.1’s more profound changes.

As for the SkyDrive app itself, it’s simple enough. At first glance, it looks and works much like the original version of the app, though the larger thumbnail-based tiles from the previous versions are now replaced with simpler, more consistent tiles. (Here, I’ve exposed the hidden app bar just to give it a bit of contrast.)

You can browse through your SkyDrive-based storage, open files contained within, and so on, just as before. But from that main view, you can also tap the SkyDrive header to expose a new menu that lets you switch between SkyDrive (cloud-based storage) and This PC (local storage)

Select This PC to browse through your local PC’s storage.

The app pretty much works as expected. And as with SkyDrive browsing, you can switch between tile (details) and thumbnail views when browsing around. File access is also consistent with SkyDrive. Music files open with Xbox Music, and Word documents open with Microsoft Word (on the desktop), for example.

Oddly, if you open a photo, however, it will open with the Photos app, but “inside” of SkyDrive. So when you’re ready to go back to file browsing, you don’t navigate back with the system-level navigational features, you tap/click a software Back button (seen in the top left) that appears when you click/tap the screen.

(You can also use the Photos app’s editing tools from here.)

On a similar vein, video files open with a video viewer, not with Xbox Video. This viewer also features that same Back button.

While Microsoft is trying to keep things simple and just provide quick access to the most frequently needed locations, you can select the Devices and Drives tile to access your PC’s hard drive (C: or whatever) as well as any other attached drives, including USB keys and micro-SD cards. So it’s all there if you need it.

I guess the only confusion about the SkyDrive app is that it’s a weird place to go to browse PC-based files. Based on the number of questions I’ve received about a Metro-based File Explorer, it’s pretty clear that few users would ever think to look to this app for that solution.