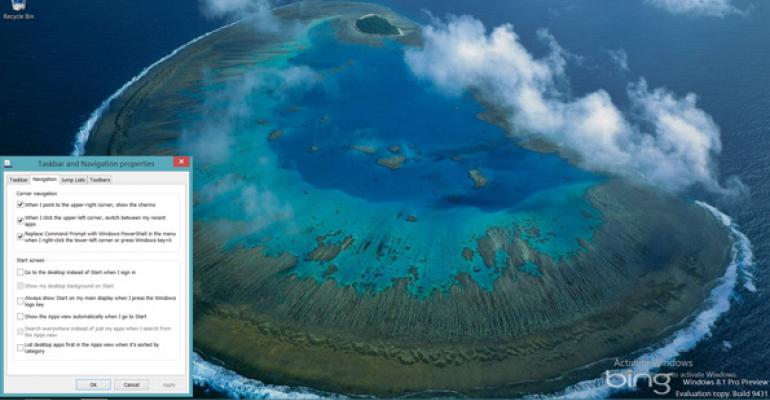 Hands-On with Windows 8.1: Boot to Desktop

Want to learn how to skip the Start screen and boot right to the desktop? Here’s how

When Microsoft started publicly discussing the Windows 8.1 update for Windows 8/RT, they promised that users who wished to stay primarily in the desktop environment would be able to skip past the Start screen on boot. Well, it’s true: You can boot directly to the desktop with Windows 8.1. Here’s how to configure it.

Oddly enough, you can’t configure boot to desktop from the newly enhanced PC Settings interface. Despite being redesigned to accommodate dozens of new configuration options, there’s nothing in there about booting to the desktop. Instead, you configure this feature—logically enough—from … the desktop.

After installing the Windows 8.1 update, navigate to the desktop environment (WINKEY + D, among other methods). Then, right-click on a blank part of the taskbar. (And not the Start button.) In the pop-up menu that appears, choose Properties. This will display the newly renamed Taskbar and Navigation Properties window. (It was called Taskbar Properties previously.) Then, select the new Navigation tab.

Find the option titled Go to the desktop instead of Start when I sign in.

Select that option and then click OK to close the window.

Voila! Windows will now boot directly to the desktop after you sign in on a reboot.