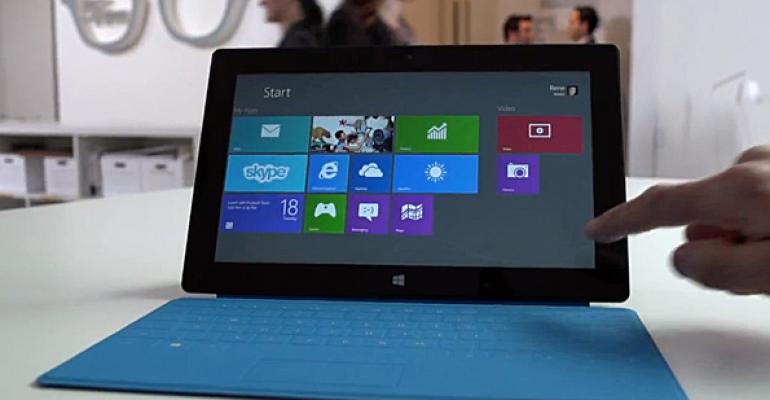 In the final installment of Going Pro, a look back and a look ahead

When a Surface Pro loaner unit arrived about a month and a half ago from Microsoft, I set out to document my attempt to move to using this device as my sole PC going forward, replacing both a tower desktop PC and my Ultrabook in the process. It’s been an interesting experience, but it’s time to wrap it up.

Because I had received the device a few weeks before I could write about it publicly, I started mapping out this series of “Going Pro” articles. The articles I planned were mostly pragmatically-oriented, focusing on specific aspects of the migration from other hardware to the Surface Pro. But as the time to publish arrived, I had started thinking about Surface Pro a bit more broadly, and the resulting series changed a bit from what I had originally envisioned.

Part of the reason for this is that the Surface with Windows 8 Pro is not ideal for my own needs. This isn’t a refutation of the device, or of my initial review of Surface Pro, and shouldn’t be considered contradictory in any way. I’ve been reviewing computing hardware and software products for about 20 years now, and I learned long ago how to separate my own needs from those of general PC users. Surface Pro, like any other product, has its strengths and its weaknesses.

What it comes down to for me, specifically, is that it’s just too small. I’m 46 years old, I have pretty bad eyesight, and I’m a pretty large guy. (Sorry, girls, I’m taken.) So I prefer a larger screen both at home—where I use a 27-inch 1080p display and would love to go even larger—and on the go, where I use what is still a rare type of product, the 15-inch Samsung Series 9 Ultrabook. This portable machine, inconceivable just a few years ago, combines an ample screen with the perfect resolution for the size (1600 x 900) with amazingly light weight (3.6 pounds). If Samsung made a 17-inch version with a 1080p display I’d buy it in a second.

(Side-note: In the buildup to the release of the 15-inch MacBook Pro Retina last year, everyone assumed this device would be a 15-inch version of a MacBook Air. I had intended to buy that device until I saw the actual product, which is a super-expensive, super-high-res, and surprisingly thick/heavy machine that is not, in fact, a MacBook Air. Samsung came to the rescue just a short time later with its 15-inch Ultrabook, exactly what I was looking for.)

With a 10-inch screen that is overloaded with a (for the size) unacceptably high-resolution screen, the Surface Pro is—again, for me—the wrong combination of specifications. Too, the Type Cover, while excellent, is just a bit too small—yes, again, for me—to use regularly. It’s fine for taking notes in meetings, and for banging out short articles as I did on the plane recently to and from Cancun, and from the hotel room. But even a reasonably-sized keyboard, like the one on the Samsung, or an excellent portable keyboard, like the ones on Lenovo’s ThinkPad and IdeaPad machines, isn’t acceptable for long-term use.

Of course, I’m a writer. I spend most of my time sitting in front of a screen and writing. This is not how most people would use the Surface Pro, but I assume it’s understandable how the size, the screen, and the keyboard all combine to make this device less than ideal. For me.

Now, unsuitable for me doesn’t mean unsuitable, and it certainly doesn’t mean unacceptable. Surface Pro is a fascinating and lust-worthy device, one that wakes up both sides of the brain when examined. It’s beautiful and useful, portable and compatible, and Microsoft’s unique approach to hybrid computing is still new enough to be exciting and fresh. People will continue to be impressed and even awed by this machine for months to come, and it elicits comments and stares whenever it’s out in public. This, more than anything, tells me that Microsoft is onto something with this form factor.

So do I still recommend Surface Pro? Hell yes, assuming you fully understand the compromises that using such a device entails. But then, that’s how I concluded my original review. So in that sense, nothing has changed: Two and a half months with Surface Pro have reinforced my initial impressions of the device, but also confirmed something I was a bit afraid to admit to myself: I just can’t use this kind of device full-time myself.

Looking ahead, I’m still very much convinced that touch-enabled Windows devices are the future and that some form of Surface-like form factor will essentially replace today’s Ultrabooks and laptops. People who haven’t used touch on traditional PCs dismiss it out of hand, but that view is misguided, as anyone who has used such a device can tell you. Hopefully, Microsoft will expand the Surface lineup in the future, both with portable devices and with desktop PCs. I’m ready to ride that wave, but I’m still looking for the right hardware for me.