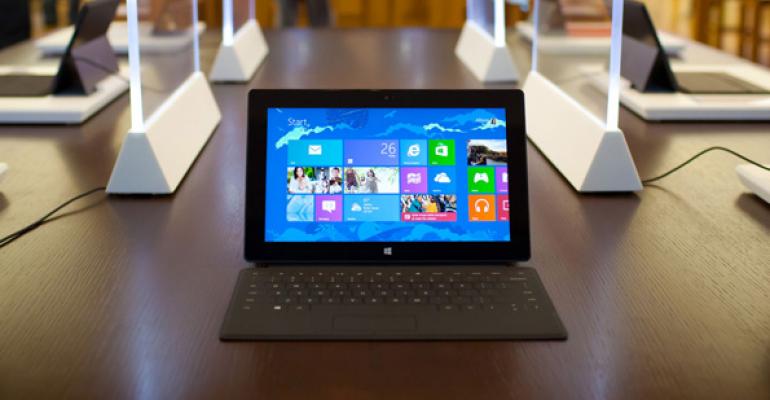 Using the Surface Pro as a desktop replacement proves problematic

On the face of things, it seems like a fairly simple challenge, and we’ve been connecting portable computers to desktop-based docking solutions of various kinds for years. But like most modern Ultrabooks, the Surface Pro wasn’t designed with docking in mind. There’s no officially-sanctioned docking solution—at least not yet—so you can’t just plug and go. That is, you’ll have to deal with at least two plugs, typically a USB-based dock and the power connector.

If you’ve never actually done this with a Windows-based PC before, I know what you’re thinking: What’s the big deal? And it does sound fairly straightforward. The problem is, it isn’t. Not with Surface Pro. And not usually.

To be fair, sometimes it just works.

Upstairs, my wife uses a jury-rigged docking solution that combines a Samsung Series 9 Ultrabook with a USB hub and an HP widescreen display. She has three things to plug/unplug when she puts this whole thing together or takes it apart: The display (which requires a special VGA adapter for the Ultrabook), the USB hub, and the power connector for the computer. It won’t surprise you to discover that my wife is a patient person, so she puts up with this.

When these two things don’t align, your experience is going to be terrible. And such is the case with docking the Surface Pro.

The Surface Pro, as you know, utilizes a 1080p (1920 x 1080) HD screen that is often touted as one of its best features. But this display is only 10.6 inches big. Which is to say it’s tiny by PC standards. The smallest Ultrabooks employ 11-inch screens, typically at 1366 x 768, and I personally find them too constrained, size-wise, with 13 inches being the sweet spot. But the Ultrabook I use regularly is a rare 15-inch design (with a 1600 x 900 resolution that I find quite comfortable). For me, and for many others, the Surface Pro screen is simply too tiny to accommodate that 1080p resolution.

But you don’t have to take my word for it. Microsoft ships the Surface Pro with the rarely-used desktop display scaling feature set to 150 percent. This bumps up the size of all on-screen objects by the specified percentage. So at 150 percent, everything is half again as big as it would be natively. The effect on the 10.6 inch Surface screen is that the desktop looks roughly—not exactly, roughly—like a 1366 x 768 display.

Note that scaling is not the same as changing the resolution. If you were to manually change the resolution of the Surface Pro screen (or that of any other computer) to 1366 x 768, you would be literally altering (reducing, in this case) the number of pixels that are displayed. With scaling, the native resolution remains the same—it uses all of the available pixels—and online elements are “scaled” by the configured percentage. Again, in this case, everything is half again as big as it is usually.

Windows’ support for this kind of scaling has always sucked and most people who have played with this feature inevitably return to the native 100 percent scaling because of the weird warped effect of some onscreen elements. And it doesn’t help that applications support this feature differently. Microsoft applications like IE and Office scale with the OS. But Chrome, Photoshop, iTunes, and most other desktop application simply ignore the scaling setting. You get a mishmash of interface sizes.

Windows’ lackluster desktop scaling functionality really becomes a problem when you need to connect a second screen. Among other issues, you can’t set the scaling to different values for each screen. So while the Surface Pro’s 1080p screen looks OK at 150 percent scaling, when you duplicate or extend or replace that screen to a second display, like my 27-inch Planar monitor, which also runs at a native 1080p resolution, it looks terrible. Onscreen elements are now gigantic, and the Windows desktop looks like a Fisher Price toy.

So you spend time—a lot of time, in my case—trying to find some happy medium. 125 percent scaling means the onscreen elements are too small on the Surface and too big on the external display. There is literally no happy medium.

There are other issues with using an external display with this kind of configuration. And as any person who has used a laptop with a docking solution and external monitor will tell you, these issues can drive you nuts. As you switch between the external display and just using the Surface, the onscreen windows will constantly resize the match the changing screens. And with a USB-based docking solution like the one I’m using—see below for details—this type of screen switch, and resultant window resizing and repositioning, can happen inadvertently throughout the day. The screen will flash, the Surface display will power on (or the external display will switch off), and all your windows will be resized and repositioned. And then it flashes and goes back to normal, except that all the windows are messed up.

Metro will save us from all this

In the future, this won’t be a problem. The desktop scaling issues I’m desperately trying not to mention in more detail here are indeed desktop scaling issues only. The new Metro environment handles display scaling far more elegantly, and while it’s not truly resolution independent, it may as well be. Metro-style apps look great—with clean, readable text and properly sized, scaled, and positioned graphical elements—on both the internal display and my external monitor. All is well.

Or, all will be well. The reason I’m connecting this thing to a dock, external display, and other peripherals is that I can’t yet use only Metro apps. I need desktop applications like Word, OneNote, Chrome, Photoshop and Skype to get work done each day. And I still use many other desktop applications—iTunes, Windows Photo Gallery, and even Paint—preferring them to whatever Metro alternatives now exist. The desktop may be going away. But it’s not happening overnight.

With all this in mind, I’ve set out to see whether Microsoft’s innovative new Surface Pro tablet could replace both my desktop tower PC and my main portable computer, that 15-inch Samsung Ultrabook. I won’t pretend it hasn’t been difficult, and many of the articles in this Going Pro series will discuss the issues I’ve had in more depth. But the first weekend was especially painful.

On Saturday, January 26, I shut down my desktop tower. Then, I crawled under the desk and began unplugging USB cables: The keyboard, mouse, webcam, and M-Audio converter for my podcasting microphone. The audio cable, attached to Bose speakers. The Ethernet cable for network connectivity. And a couple of USB cables for device syncing.

Replacing this tower PC is the Surface Pro. Of course, while Surface Pro has video-out courtesy of Mini DisplayPort, it has only one USB 3.0 port. So some form of USB hub, at the least, would be required. But since I’d like to use fewer plugs and have Ethernet connectivity too, I went with a USB 3.0-based dock that supports video-out as well. The one I settled on, which I researched to ensure it natively supported Windows 8 first, is the Plugable USB 3.0 docking station.

This device features four USB 2.0 ports, two USB 3.0 ports, gigabit Ethernet, and a single external display port that supports up to 2048 x 1152 (or 1080p over HDMI). It connects to the PC via a single USB 3.0 cable. So all I need to worry about are this USB connection and the Surface Pro’s power cable.

It works. And there are even moments when, sitting here, I forget I’m not using the desktop PC. Indeed, when a friend gave me a DVD to watch, I immediately went to rip it to H.264, forgetting I didn’t have a DVD drive attached to this thing. (It’s a TV recording of “Mystery Science Theater 3000” from the 1990s if you’re curious.) Fortunately, I do have a USB-based DVD burner for these increasingly rare occasions.

And then there are the moments where I’m made all too aware of the fact that this isn’t my tower PC.

That DVD rip, slower on the external drive, was also louder, both from the drive itself and from the fan noise from Surface, which kicked in quickly and didn’t abate until long after the process was complete. I’ve had the fans kick in every day, often for what seems like no reason at all, but there are a few things that will trigger them every time: Encoding video off of a USB 3.0-based Hauppauge HD PVR 2 (which I use to get Xbox 360 screenshots). Watching a video with VLC Media Player. And playing any reasonably modern video game, like Bulletstorm.

If you can get over the racket, the Surface Pro is a perfectly reasonable desktop solution. It’s Core i5 processor and 4 GB of RAM are woefully inadequate compared to the high-end Core i7 processor and 8 GB of RAM my tower PC uses, but in real world use, I see no performance differences. The 128 GB SSD is perfectly sized for mainstream use, smaller than the 256 GB SSD in the tower PC but never an issue. I still have over 32 GB of free space after loading it up. And I can of course use micro-SD and USB-based disks for more expansion if needed.

I mentioned that the first weekend was tough.

It was, and for a variety of reasons. Some of it was the regular series of “oh, right, I completely forgot about…” events that would mar any PC migration. For example, on my tower PC, I’d import pictures from my camera by plugging the device’s SD card into the all-in-one reader on the front of the PC. But there’s no SD card reader on the Surface Pro, just microSD. So I have to remember to connect the camera via USB, to a free port on the dock. I have yet to remember to do this, and a few times I’ve actually plugged the SD card into the powered-down desktop PC and wondered why it never showed up on the Surface. Sigh.

But most of the issues I had  up front involved the aforementioned scaling issues, which I admit to spending far more time on that I’m comfortable with. I was ready to give up on this configuration several times before I decided to finally just tough through it. I could see this being really frustrating for people, and that’s why I dinged Surface Pro in the review on this issue. It’s such a glaring hole, and since it’s on the legacy desktop side, it’s fair to assume it will never be fixed. Windows users have in fact been dealing with this for years.

(Update: Since I wrote this, Surface’s Panos Panay claimed Microsoft would in fact fix this issue, and he explained his own set of workarounds.)

To this point, my Surface Pro experience had followed a fairly negative new technology adoption curve: An initial wave of excitement because it’s something new, followed by a nervous a round of disappointment as the device’s limitations because glaringly obvious and problematic, and then a begrudging acceptance of the compromises I’d have to make. Oddly enough, things actually got better over time as I came to appreciate that the Surface Pro, while painfully not perfect, did indeed offer some unique charms. And certainly, my expectations were quite high, perhaps too high.

Update: Someone asked for a photo of my actual desk. Sorry, I forgot that: