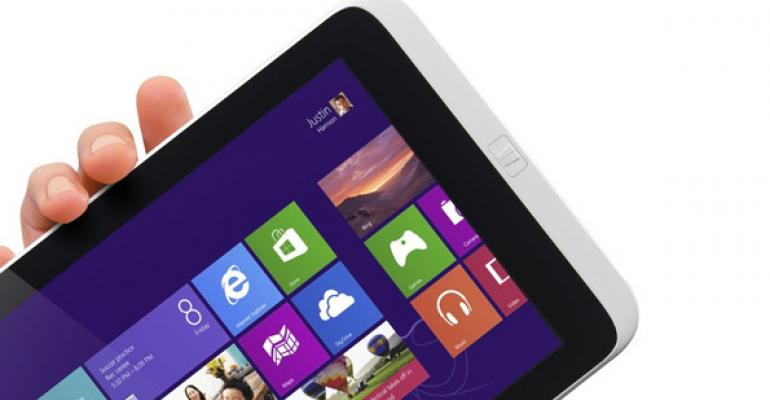 Billed as the world’s first 8-inch Windows 8 tablet, the Acer Iconia W3 is shipping this month and will be available for preorder starting tomorrow, June 4. I spent a bit of time with the device today at a TechEd 2013 briefing, and based on what I’ve seen, and my previous experience with Acer’s recent hardware, I’m pretty excited about this device.

I wrote a news story, Acer Announces First Windows 8 Mini-Tablet, about this device earlier this morning. And of course the Iconia W3 was previously and inadvertently leaked by Amazon. This is a more detailed write-up with a point-by-point breakdown of what’s important with this device.

Windows 8, not Windows 8.1. First, it’s worth pointing out that the Acer Iconia W3 will ship with Windows 8 and not Windows 8.1 as its arriving within weeks and Windows 8.1 won’t be finalized until late this summer. At TechEd, this meant that the little W3 was a weird oddball on a stand of Windows 8.1 machines I spent some (read: very little) time playing with at the show so far.

Office. As was hinted at the Amazon leak, the W3 ships with a free copy of Office 2013 Home and Student, presumably to make this offering more competitive with Windows RT. I previously (and exclusively) reported that all Windows 8.x mini-tablets will include a free version of Office. This is the first.

Size and weight. The W3 is a tiny machine, barely over 1 pound in weight and 0.45 inches thin. In many ways, it looks more like a very large smart phone than a small tablet, except for the tell-tale widescreen display (and of course the fact that it runs Windows 8).

Keyboard. The highlight of this device in many ways is that it can be coupled with a full-sized keyboard base that looks like it was ripped out of an Ultrabook. This keyboard is wider than the W3, so the tablet sits on it in a kind of groove and connects via Bluetooth. When traveling, you can actually dock the two devices together, which is a nice touch. Unfortunately, the keyboard doesn’t have a wrist rest area or a trackpad/pointer of any kind, however.

Battery. No surprises given the Clover Trail processor, the W3 should get about 8 hours of battery life.

I’ll be preordering an Acer W3 and am very interested in seeing how this device performs both as a PC companion—a nicely sized mini-tablet—and as a travel PC: That full-sized keyboard alleviates one of my key issues with the Surface devices, and I’d love to see Microsoft offer such an option for its own tablets.