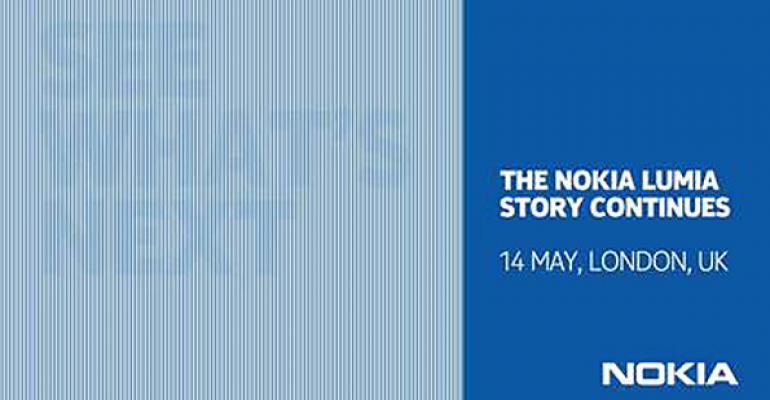 Thoughts About the Nokia Lumia Event in May

The Nokia Lumia story continues ... On May 14

Nokia has invited bloggers to a mysterious Lumia event in May, teasing us with its plans to show us “what’s new” and see how the “Lumia story continues.” Nokia fans from the around the world are waiting with bated breath, but since we have two weeks to go, let’s do what we can do: Speculate.

Since the official invite (shown above) is not much to go on, let’s step through the possibilities, starting with the most obvious and moving forward to the least likely. Note that it’s unlikely this event will include only a single Lumia device: My guess is that the event will include multiple devices, multiple device types, and a general discussion of how the Lumia lineup has evolved and where it’s going into the near future.

Most likely: One or more current generation Lumia handsets

One of the tech industry’s worst kept secrets is that Nokia’s current flagship device, the Lumia 920, will be slightly modified and made available to other wireless carriers. In the U.S., for example, we expect to a see a device called the Lumia 928 appear on Verizon Wireless in the near future. This device will feature identical or nearly-identical specs to the Lumia 920, and a few external changes related to speakers, microphone, and the basic design. But roughly speaking, we expect this phone—or phones—to be a way for Nokia’s current flagship to move beyond its limited distribution. (Nokia’s strategy of placing its flagship device on a single carrier in major markets is, I think, a mistake, and I hope that the firm changes this policy going forward.)

When Microsoft announced that Windows Phone 8 would be based on Windows 8 and would thus inherit many of the benefits of that more mainstream computing platform, it was clear that the platform could suddenly move forward very quickly. And Nokia’s second-generation Windows Phone 8 handsets should reflect that evolution nicely, with quad-core processors (where the current generation has dual-core processors) and, if the rumors are true, 1080p screens.

The question here is two-fold: When will such devices arrive and will they be based on the current Windows Phone 8 platform or on Windows Phone 8.1 “Blue”? My guess is the former, given the timing: Nokia needs to ship next-gen devices in time for the holidays and the Windows Phone version of “Blue” could be delayed past that point. But no worries: It should be a free upgrade.

I’ve received information from two sources, neither on my a-list, that Nokia will deliver a Lumia “phablet” in 2013. This device would feature a 5-inch or bigger screen and could resemble devices like the Samsung Note 2. While I’m not totally sold on the veracity of these rumors, it’s pretty clear that Nokia has spent the past year filling out its Lumia product line and that the only real missing piece right now is indeed a phablet. So this an area where common sense suggests that Nokia must be heading in that direction. I’d be surprised if they didn’t release a phablet this year, I just wish I had more hard data to back that up.

Ever since Nokia adopted Windows Phone as its primary smart phone platform, tech enthusiasts have pondered whether the firm would also create a Windows RT- or 8-based tablet. And it’s not hard to imagine a polycarbonate tablet with the familiar Lumia look and feel coming to market. That said, Nokia has less to offer in the tablet space and wouldn’t have the special relationship benefits it gets from Windows Phone, meaning it would just be another tablet vendor. (This is the reason Nokia didn’t adopt Android, by the way. Food for thought.)

Ultimately, a Lumia tablet seems inevitable, but for the company to see success here it’s going to have to really differentiate itself from the competition while delivering a device with the quality of Surface. Fulfilling both of those needs are going to be tough.

See you in two weeks

Like any tech enthusiast in general and any Nokia fan specifically I’m very eager to see what they do announce. I can say this: I’d happily purchase any and all of these rumored devices as soon as possible.