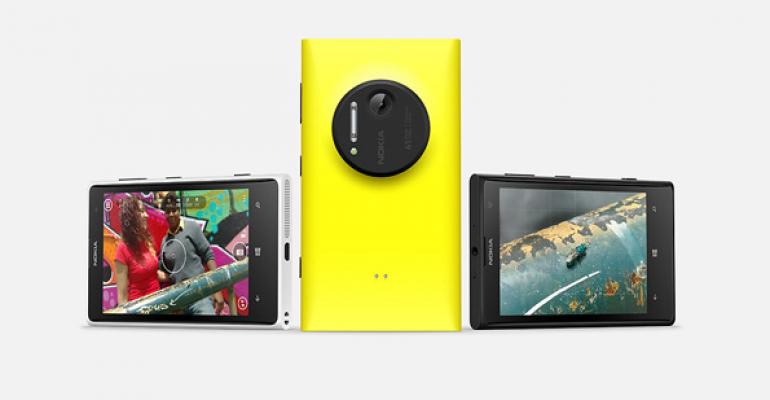 At a live event in New York City today, Nokia announced its latest flagship smart phone, the Lumia 1020. And while this device may closely resemble its other unibody Lumia designs at first glance, it ships with an amazing 41 megapixel camera that could change smart phone photography forever.

First, the basics. For the most part, the Lumia 1020 very closely resembles the Lumia 920 in ways both good and bad. It has the same unibody design, shipping in this case in black, white and yellow polycarbonate. Despite that, the 1020 is noticeably lighter than the 920, remarkably so given the huge camera, and I wonder if some work wasn’t done to somehow change the internals of the body to make that unibody shell lighter. Whatever they did, it works. My complaints about the 920’s density do not apply to the 1020.

On the flipside, the 1020—unlike the 920 or 928, but like the 925 or 720—does not include wireless charging capabilities. As with those latter devices, Nokia will sell a clip-on back plate to add wireless charging, but that will add a bit of heft.

Of course, the big deal here is the camera. And it is indeed a big deal. Based purely on a few minutes of hands-on time—I’ll be getting a review unit ASAP—and this morning’s launch presentation, here’s the rundown of what’s happening with the 1020 camera:

41 megapixels. As rumored, the Lumia 1020 includes a 42 megapixel camera sensor, which offers a dramatically higher pixel count than any other smart phone camera. The native resolution is 7712 x 5360.

Two shots at once. Of course more pixels don’t equate to better quality. So what the 1020 does is save two images each time you take a shot: One high-res “master” in 38 megapixels (4:3) or 36 megapixels (16:9) and one 5 megapixel version for sharing. That high-res shot is a key part of the 1020 strategy, as you can later go and post-process it and create further edited versions for sharing. But even the 5 megapixel version isn’t “just” 5 megapixels: It’s an oversampled image that Nokia says takes the best of 7 available pixels for each pixel in the final image, resulting in the highest-possible quality.

Zoom. With those high resolution originals, you can zoom into shots later while editing and create new versions of the photo (or “new stories,” as Nokia says) in which the detail hidden in the shots are laid bare. The demos of this capability were very impressive, suggesting that the super-high-res nature of the 1020 will provide some of the benefits of real optic zoom, but digitally. I’m very eager to test this extensively.

Auto-compensation. Where previous Lumias offered optical image stabilization using tiny coils to steady the image and capture more light while your hand subtly moves, the 1020 does so with ball bearings and magnet-driven motors. You can actually hear it if you’re listening for it, which is sort of excellent. But the result should be blur-free photos, day or night, regardless of the conditions.

Xenon flash. Like some previous Lumias, the 1020 offers a large Xenon flash for dark conditions.

Six lenses. The Lumia 1020 has six lenses—the most in any smart phone—and provides Zeiss wide-angle optics.

Nokia Pro Camera. Exclusive to the Lumia 1020 is a new camera app called Pro Camera that provides simple, on-screen access to individual camera features via a scrollable ring or several features at once via a set of rings. This means you can adjust settings like exposure and see the changes that will occur in real-time through the viewfinder. Very nice.

Video. The 1020 can also record HD video, of course, again with incredible detail, and with distortion-free (and stereo) audio that was truly impressive in demo.

Extensibility. Microsoft already lets developers extend the capabilities of all Windows Phone 8 handsets via special Lenses apps, and Nokia has created a new imaging SDK for the 1020 that will enable a new generation of apps.

Windows Phone 8. From a software perspective, the Lumia 1020 of course runs Windows Phone 8, and it ships with the very latest updates for that OS, including the GDR2 update that will ship to other phones starting in August. It also includes all the great Nokia apps for Windows Phone, of course, in addition to the 1020 exclusive Pro Camera app mentioned above.

Accessories. Nokia has always provided great accessories for its Lumia handsets and the 1020 is no different, with a wireless charging plate and a snap-on grip for one handed shooting, two step shutter control, tripod mount, and extra battery. I suspect most 1020 users will want the grip. ($80.)

Availability. The Lumia 1020 will ship on AT&T Wireless exclusively in the US on July 26, with preorders coming July 16. The cost is $299.99 with a two-year contract, and the device (or at least a variant of it, depending on market) will be made available internationally this quarter.

So far, I’m really impressed. That said, I get that a flagship device is not for everyone. Photography is clearly the emphasis here, and as more than one person noted wryly at the launch event today, it’s a bit odd for Nokia to be launching such a photography-dominated device that can’t even connect to Instagram, one of the most popular photo sharing services on earth. This is fair, but I think the point of the 1020 is to advance the state of the art in smart phone photography, which it appears to do. The sharing features in the underlying platform, Windows Phone 8, are what they are.

I’m looking forward to reviewing this one.