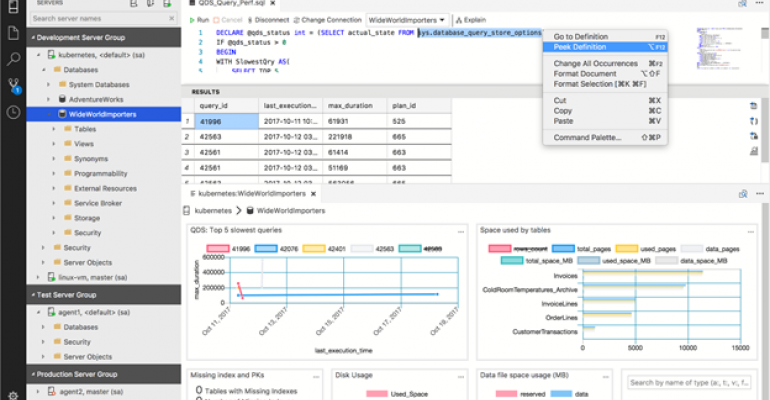 This product -- the first new tool for interacting with SQL Server in over a decade -- is the next step towards modernizing the dated SQL Server Management Studio tool.

Microsoft SQL Operations Studio is available for Windows, MacOS, and Linux from a central location at Microsoft’s Docs site here. Instructions for installing each of these client versions are also located at this same source so it’s quite easy to download any of the versions for your various devices. If you’re like me and many of my peers we’re working on multiple platforms depending on our circumstances so this makes for a simplified download experience. Microsoft SQL Operations Studio is being marketed as a lightweight alternative to interacting with your SQL Server databases whether they’re:

One of the most interesting features I intend to explore (and write about here for you all to follow along) is the ability to customize the graphical experience of the management dashboard. In addition to all the featured targeted to Developers and Dev Ops staff, many frequent administrative tasks and insights are available through this new tool. The Management Dashboard is accessed via connecting to a database, right clicking, and selecting “Manage” from the available options. The default Management Dashboard allows you to gain similar insights into a database as you would from the database properties modal window in SQL Server Management Studio. Additionally, you’re also able to initiate backups and restores of your databases and execute queries from the Management Dashboard while also exploring all the various objects that comprise your SQL Server databases. I will go in depth into the customizing process in a dedicated article on that process soon.

Use the Scripting Tool of Your Choice

Be it Bash, PowerShell, sqlcmd, SSH, PSQL, or BCP you can interact with your databases using any of those scripting languages from inside the Microsoft SQL Operations Studio tool.  There is no need to use multiple tools to accomplish your scripting tasks.

But What is Missing?

That’s a question with answers that depend on your role and typical interaction with Microsoft SQL Server. For the developer and devops engineer I’d say simply “nothing.” This is a tool filling a void for those roles. For the DBA the answer would be “quite a long list of things.” While you’re currently able to view database and server level objects like tables and logins you can’t add new objects through any sort of user interface – you need to rely on Transact-SQL for any administrative efforts such as those. There is also no support for SQL Server Agent. Scheduling jobs, configuring alerts, creating operators, setting-up Database Mail, all those tasks also would need to be accomplished through t-sql querying.

I’m quite pleased with the initial release state of this new tool. It’s the first tool released by Microsoft that can provide core functionality for interacting with Microsoft SQL Server from operating systems beyond the Windows O/S and for accessibility for the core needs of the Developer and Dev Ops Engineer. While it doesn’t have all the bells and whistles for DBAs to do all of their tasks it does also offer an alternative for SQL Server Management Studio for all the basic (and many mid-tier) administration tasks. For those Administrators comfortable with administering their environment via a code-most/first strategy it even allows for most advanced tasks as well.