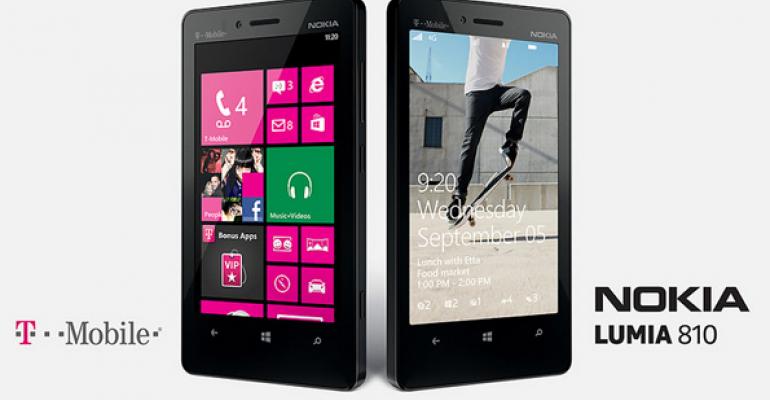 AT&T isn’t the only wireless carrier in the US to get new Windows Phone 8 handsets this week. Tomorrow, T-Mobile will begin offering the Lumia 810, which, like its Lumia 820 stable mate, offers a surprisingly well-rounded package for very little money.

My assumption is that the Lumia 810 and 820 are genetically very similar, if not identical. And while the two devices do indeed share many innards—see below—this isn’t the simple rebranding job I’d expected. They’re quite different physically, with the 810 offering a slightly larger body and sharper edges, with completely different removable back plates, battery and back configuration.

Indeed, the Lumia 810’s battery is significantly bigger than that of the 820—1800 mAh vs. 1650 mAh—offering better talk, standby, and media playback times than its AT&T rival. But despite being a bit bigger, it doesn’t seem any heavier to me in the hand.

Specification-wise, these devices are indeed identical, with the same 1.5 GHz SnapDragon S4 processor, 1 GB of RAM, 8 GB of internal storage, and microSD expandability (with up to a 64 GB card). Both feature NFC, LTE, and optional Qi-based wireless charging, though the latter will require an optional back plate. Which is fine, because like the 820, the 810’s is removable and replaceable with color options. (Presumably. I don’t see any on offer yet.)

It features the same 4.3 inch screen with the same 800 x 480 resolution. Back when this was all you could get on a Windows Phone handset, critics noted that Android and iOS offered better resolution devices. But now that I’ve used HD Windows Phone 8 devices, I can tell you, again, that none of this matters. The 800 x 480 screen on this device—as with the 820—is beautiful. You’ll never notice any missing pixels.

The 810 also appears to offer the exact same 8.0 megapixel camera as the 820. It’s excellent. And while I’ll again stress that it doesn’t quite reach the heights of the flagship Lumia 920, what does? This is a solid camera for a smart phone and on par with what I see in the HTC 8X and Lumia 820. It’s close to iPhone 5 quality.

Of course, no one is really going to choose between the Lumia 810 and the 820. You’re going to choose based on wireless carrier, and if you’re a T-Mobile customer, this appears to be an excellent option. You get the great Nokia apps, of course, and also a weird selection of T-Mobile apps. And a crazy pink T-Mobile theme. Naturally.

Here are some photos of the Lumia 810, some of which compare it to the slightly smaller (and AT&T based) Lumia 820.