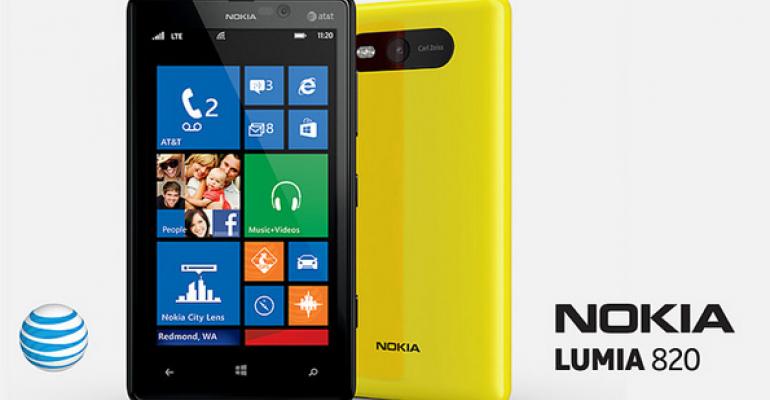 Nokia's mid-level Lumia on AT&T surprises, and in a good way

While a lot of attention has been paid to the flagship Windows Phone 8 handsets, Nokia in particular is offering an interesting range of mid-line Windows Phone 8 models as well. Case in point, the Lumia 820, which appears to be a surprisingly solid entry.

The Lumia 820 is one of several Lumia 8xx models that Nokia will sell this fall, and this one is an AT&T exclusive. (Those lucky few who received a Windows Phone 8 dev “sled” a few months ago will recognize it as the retail version of that device.) It’s kind of brickish looking but has nice, comfortable rounded edges and feels good in the hand.

From a specifications perspective, the 820 is middle of the road: 1 GB of RAM, 8 GB of internal storage, a previous generation 800 x 480 screen, and a dual-core 1.5 GHz Snapdragon S4 processor. Nothing impressive, right?

Hold on one second.

The Lumia 820 also features numerous potentially killer features that belie its low price: MicroSD expansion, an excellent 8 megapixel camera, a removable back plate that can be replaced with colored options that include wireless charging functionality, and of course those excellent Nokia exclusive apps. Even Nokia refers to this model as its “most versatile” Lumia. And it comes with all the expected Windows Phone 8 niceties, including LTE networking and NFC.

And these killer features really are killer. You can expand the 820 to 72 GB of storage (8 GB internal + 64 GB on microSD), more than double the storage of the flagship Lumia 920. That 8 megapixel camera lacks PureView technologies, whatever that means, but it takes excellent photos. And those back plates mean you’re not stuck with just one color: You can swap them out to suit your mood.

And it costs just $50 at AT&T with a two-year contract.

This sounds a bit crazy, but if you are considering a Lumia 920, you should really look at the 820 first. If picture quality is your primary concern, the 920 will win every time. But the thing to remember here is that the 820, like the HTC 8X, while falling short of the 920, still provides better picture taking capabilities than any previous generation Windows Phone handset. We’ve gone from rags to riches when it comes to photo taking. The other 820 attributes may in fact put it right over the top.

Something to think about. A wrench in the plans, so to speak.

Here are some photos of the admittedly pedestrian Lumia 820 packaging. Thanks to AT&T, that’s still an embarrassment.