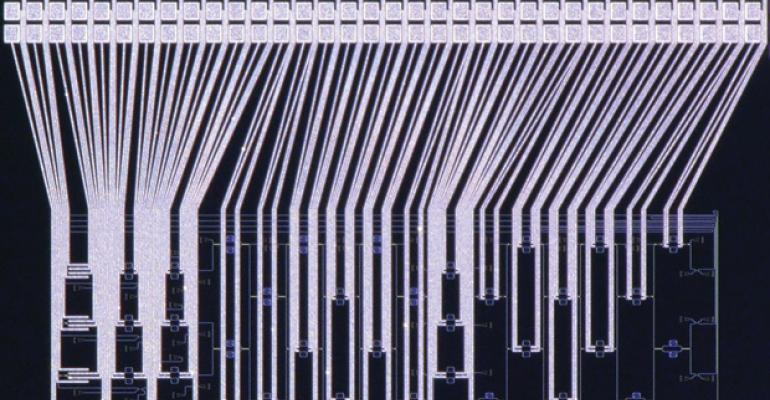 Light and silicon, together at last? A team at Hewlett Packard Labs, part of HPE, has loaded a chip with 1,052 optical components — the most ever in which the photonic components all work together.

Funded by a DARPA grant, the specialized chip could help pave the way to make optical processors more practical, particularly for certain types of specialized computations that traditional computing methods struggle with, such as "traveling salesman" type problems that must quickly parse a number of potential, interconnected options.

From IEEE Spectrum, which reported on the work:

The Ising approach is based on a century-­old model for how the magnetic fields of atoms interact to give rise to magnetism. The model envisions every atom as having a property called “spin” that prefers to point either up or down. In a ferromagnetic material, above a certain temperature, these spins are oriented randomly and are flipped repeatedly by heat. But when the temperature falls below a certain threshold, the interactions between the atoms dominate, and most of the spins settle down to point in the same direction.

Computers inspired by this model—so-called Ising machines—use such settling actions to arrive at answers to optimization problems. The problem to be solved is entered into the machine by tuning the interactions between its computational elements. These elements, the spins, are designed to be in one of two states and interact with one another until they settle into an optimal configuration that corresponds to a low-energy state.

I wouldn't expect to see these in production anytime soon, but expect to see increasing investments in new avenues of computing power as Moore's Law starts to peter out and innovators become increasingly creative in their approach to better computing methods.