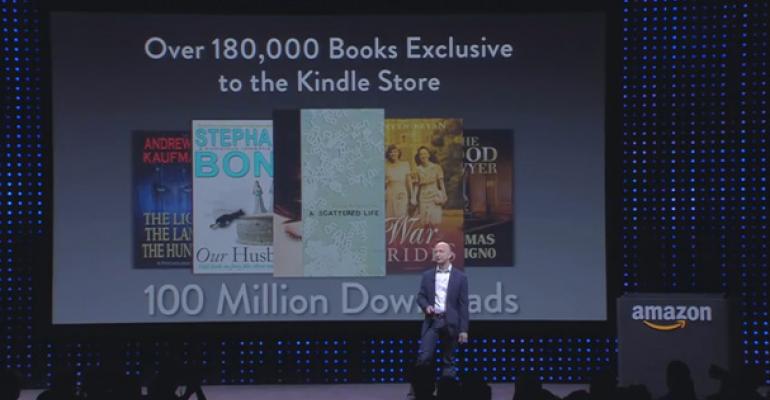 Those who wish to invest in the Amazon ecosystem—which includes Kindle books, Audible audiobooks, MP3 music purchases and a cloud player, streaming, purchasable, and rentable movies, streaming and purchasable TV shows, Android apps, and more—will get the best experience with one of the firm’s Kindle Fire HD devices. But Amazon’s secret plan is to make its ecosystem services available universally on competing devices and platforms as well. And this week, it took further steps towards that future.

This, I think, is the long-term differentiator between Amazon and all of its competitors. As CEO Jeff Bezos noted at the Kindle Fire HD launch event in September, Amazon makes money when people use their devices, not when people buy their devices. At the time of this revelation, the tech blogosphere tripped over itself to report that Amazon “makes no profit” on the Kindle line. The real story there, however, was two-fold: Contrary to previous reports, Amazon does not lose money on Kindle devices, or sell them under cost. Where Amazon makes money is on its ecosystem. It’s selling services, not devices.

I mean, obviously, Amazon is selling devices. But the Kindle Fire HD line is a Trojan Horse, something Amazon can afford to sell at cost—i.e. at lower prices than the competition, and at much lower prices that those competitors, like Apple, that exist solely to sell you hardware devices, ideally at a steady, once-a-year clip.

And that ecosystem is vast. It’s just not available equally everywhere.

Explaining why this is so is a bit complex, frankly, because Amazon makes so much stuff and it supports it in different ways on different platforms. I write about this stuff a lot, most recently in When Shopping Tablets, Buy Into Ecosystems, Not Into Devices. But let me provide two examples, Kindle and Amazon MP3/Cloud Player.

Amazon provides Kindle apps for a surprisingly wide range of devices, including Windows PCs, Macs, iPad, Android tablets, iPhone, iPod touch, Android handsets, Windows Phone, and Blackberry. There’s also a web client called Cloud Reader. The best experience, of course, can be had on Amazon’s own devices, which include various Kindle eBook readers and the Kindle Fire and Fire HD tablets. And some features are only available, today, on Amazon’s own devices, or on a very select list of other devices.

Newspaper subscriptions is an example. While you can subscribe to and read some newspapers on many devices (via the Kindle app), the two I currently read, The New York Times and The Boston Globe, are only available on Amazon devices. So I can’t subscribe to or read these periodicals on an iPad, Windows tablet, or Google Nexus 7 (using the Kindle app).

Another feature that’s not broadly available is Whispersync for Voice. For a growing collection of books, you can purchase both the Kindle and Audible versions of the same book and switch back and forth between them, with your position being maintained in the story no matter which version you use. So you might read part of a book on Kindle at home, listen to the next part during a commute with Audible, and then pick up where you left off in Kindle later that night. This is a neat feature, but you can only use it on the Audible side with the apps on Android or iPhone.

As for the music stuff, anyone can of course buy music from Amazon MP3 at any time, and on virtually any device, and if you use Amazon Cloud Player, as I do, those purchases don’t even need to be downloaded; they’re just placed in your Cloud Player. But Amazon only provides apps for this player (which are often confusingly called Amazon MP3) on Kindle Fire/HD tablets, Android devices, and iPhone. On the PC, you can use a nice web client. But there’s no Metro-style app for Windows 8/RT, no app for iPad, and no app for Windows Phone.

There are many other examples, but you get the idea. The Amazon ecosystem experience will vary wildly depending on which device(s) you use.

Because Amazon is making money on its ecosystem, however, and not on its devices, I expect these holes to be filled. I expect that, over time, Amazon’s services will be roughly equally available on all popular devices, and that it won’t matter which device type you use, because all Amazon cares about is that you’re using its services. In fact, looked at in this light, the Kindle devices are almost superfluous to the company’s future. They exist now to get you hooked.

Of course, we need to get there. And the way that happens is for Amazon to bring more and more services to more and more devices. That actually happens pretty regularly. Here are some examples from just this week.

Amazon Cloud Player App Comes to Samsung Smart TVs and Amazon Cloud Player Now Available on Roku Streaming Players. This is one I’ve really been waiting for, not so much Roku specifically, though I have one, but rather some way to get Cloud Player content playing in the living room in a way that makes sense. I’d love to see an Xbox 360 app next.

It’s quite possible that Amazon will be the eventual obvious choice for content and that those who purchase devices can do so based only on other criteria, such as hardware design or apps. That’s because Amazon is the only company that will make its services available broadly on competing devices. That’s right: Only Amazon can still win when you buy some other company’s product.