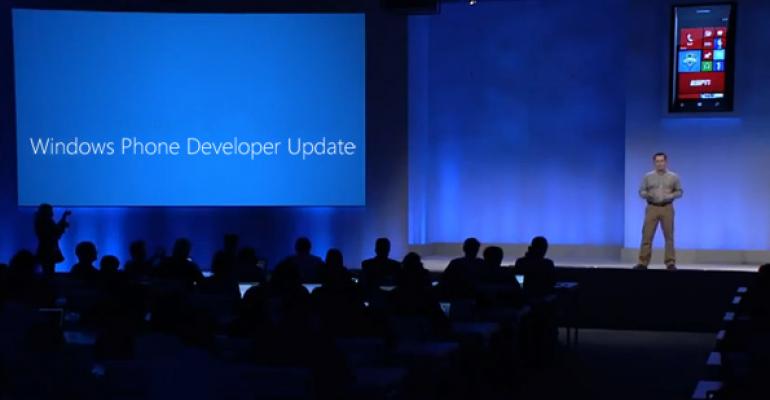 As the market for Windows Phone grows, so does the opportunity for developers

With Mobile World Congress underway this week in Barcelona, Spain, Microsoft has provided an interesting update for Windows Phone developers. Touting the progress it’s seen since the release of Windows Phone 8 in October, Microsoft claims that its mobile strategy is paying off.

This claim seems to contradict recent criticisms of Microsoft’s mobile strategy from chairman Bill Gates, depending on how you decipher his admittedly vague utterances on the topic. (I happen to think he was speaking about Microsoft’s deer-in-the-headlamp response to the iPhone back in 2007, but whatever.)

Todd Brix, writing in the Windows Phone Developer Blog, defines Microsoft’s mobile strategy like so: “fostering an ecosystem around Windows Phone [that is] characterized by quality, scale and developer opportunity.” According to Brix, this strategy is now “taking root at an accelerated pace with partners and developers reporting real and sustained growth following the launch of Windows Phone 8.”

Anyway, Brix does provide details about the opportunities for developers who target Windows Phone.

Market share. Yes, overall Windows Phone market share is low (~3 percent), but Brix cites (but doesn’t link to) an IDC study claiming that Windows Phone has about 10 percent market share in some countries. You have to pay big bucks to see this study and Brix doesn’t explain which markets he’s referring to, so it’s kind of hard to know where I should move. :)

Developer community. Developer registrations are up by over 40,000 in the first 90 days since the launch of Windows Phone 8. Downloads of the Windows Phone 8 SDK are over 500,000 since its availability less than four months ago. Developers should also check out the new Dev Center mobile app preview, which lets you track your apps and payments from you handset.

Progress yes, but this seems pretty tame to me.