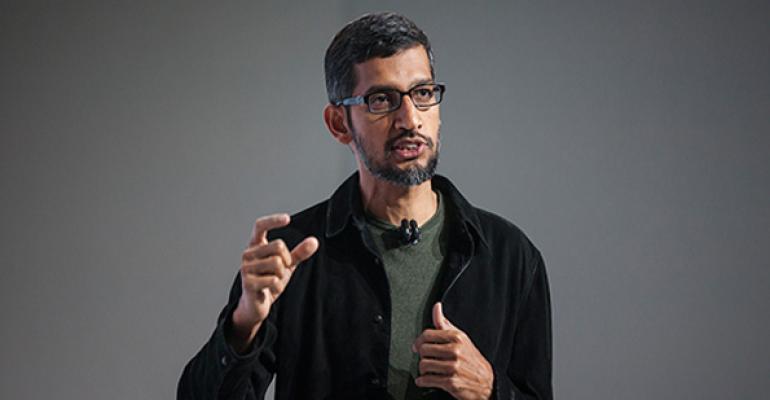 In a rare public speech in Brussels at an event hosted by European economic think tank Bruegel on Monday, Sundar Pichai, who is also CEO of Google, said “there is no question in my mind that artificial intelligence needs to be regulated,” but that “we don’t have to start from scratch” with entirely new rules in some cases.

The comments come weeks before the EU is set to unveil its plans to legislate the technology, which could include new legally binding requirements for AI developers in “high-risk sectors,” such as healthcare and transport, according to an early draft obtained by Bloomberg. The new rules could require companies to be transparent about how they build their systems.

While in Brussels, Pichai is also due to meet with Margrethe Vestager, the competition chief responsible for more than 8 billion euros ($8.9 billion) of antitrust fines levied against Google. In addition to competition, she now also oversees the bloc’s digital policies, including the plans to legislate AI.

Alphabet has battled intense regulatory pressure in Europe for years. The search giant is challenging the EU’s multi-billion-dollar antitrust fines and has sought to fight off copyright and other forms of platform regulation emanating from Brussels in recent years.

Facial recognition technology and so-called deep fakes-- or manipulated audio and video clips -- are two areas where AI could be used destructively, and companies have a responsibility “to get this right,” Pichai said. He said Google has released open datasets to help researchers build better tools to detect fakes and that it has chosen not to offer general-purpose facial recognition application programming interfaces.

Pichai touted the company’s recent developments in AI, including a Google Health algorithm that can spot breast cancer more accurately than doctors and other research for accurately predicting the weather as well as advancements by its self-driving car unit, Waymo.

The Google chief said existing rules like Europe’s privacy legislation GDPR and regulation for medical devices like AI-assisted heart monitors would serve as strong foundations for governing AI in some areas, but that for self-driving cars, governments would need to establish regulations.

But Google has also come under intense criticism over how it handles users’ privacy with some of its AI projects. Google faces a U.S. federal inquiry after the Wall Street Journal in November reported how it collects the health-care data from millions of Americans to design new AI software. It’s also facing scrutiny over the methods it uses for training algorithms that run Google Assistant.