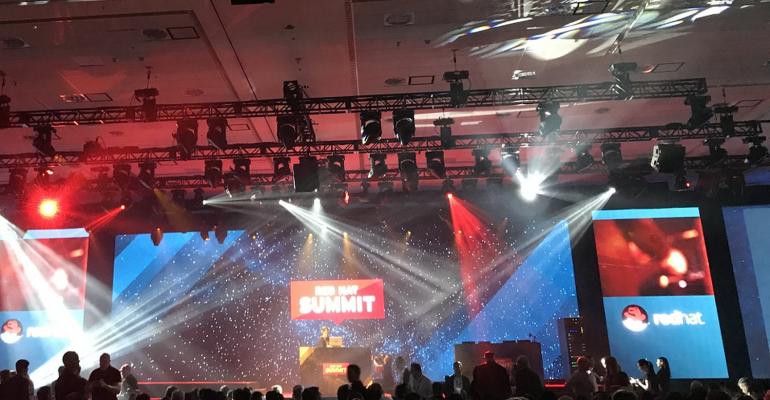 The unveiling of RHEL 8 would normally steal the show at Red Hat Summit, but this year the deal with IBM may overshadow that announcement.

BOSTON -- The first big announcement from Red Hat Summit came this morning with the unveiling of the latest and greatest version of Red Hat Enterprise Linux, RHEL 8, which is ready to ship.

This would normally be the big announcement of the conference, but this year there's an elephant in the room that none of the 8,000-plus techies in attendance can avoid: the almost completed purchase of the world's largest open source company by IBM.

Tonight's opening keynote will put Red Hat CEO Jim Whitehurst on stage with the person who will soon be his new boss, IBM CEO Ginni Rometty. Microsoft CEO Satya Nadella is making a quick sprint cross country to join the festivities, after having opened the show at Microsoft Build on Monday in Seattle.

While the Rometty-Whitehurst reunion will probably be the headline occasion at this year's event, the release of RHEL 8 will undoubtedly be the more important announcement, as the release represents both the future of Red Hat as well as the cement that will bond it's marriage to Big Blue.

RHEL is the flagship product in Red Hat's arsenal, and that remains true despite the fact that Red Hat likes to remind everyone that it's now a "cloud company."

It's been five years since the last major RHEL release, and a lot of things have changed in IT since then. Five years ago the cloud was just getting its wings, containers were the next newest thing, and DevOps was a word that no one could define.

"Making sure that customers can quickly and efficiently manage RHEL has been a big focus for this release," Hellekson said. "In this latest release, we've included a tool called the Web Console, which is a graphical interface to kind of point and click your way through some basic systems management tasks, hopefully lowering the barrier of entry for people who are new to Linux."

DevOps teams deploying containers to clouds are also increasingly relying on automation for keeping their systems running. This is addressed in RHEL 8 by expanding System Roles, an Ansible-based feature that can be used to automate routine systems administration tasks.

Hellekson said that while System Roles were included in RHEL 7, they have now been expanded.

"When people are writing their own automation in their in their own data center they can use the System Roles to perform these routine tasks," he said, "and we keep that stable over major releases. In the past the problem has been when you move to a new version of the operating system you have to redo all your automation, because it's new interfaces, things are named differently, and other things. But with System Roles, we're creating stability across the major releases so you don't have to retool when you do a new update."

In many ways the expanded System Roles feed two birds with the same worm. Not only do they make it easier for DevOps to automate routine operations, they'll also remove future headaches on the upgrade path, as Red Hat is moving to a quicker and more consistent release schedule, perhaps as often as every three years.

They also make it easier for DevOps to spend time harnessing the cloud, and IBM's purchase of Red Hat was all about the cloud.