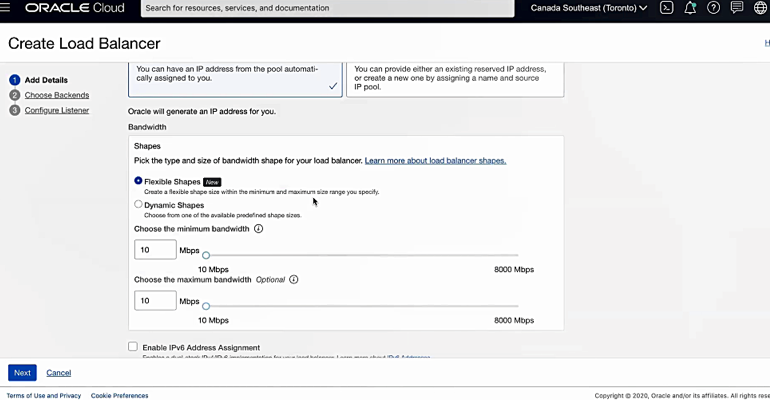 Oracle is adding new options to its public cloud infrastructure that provide better flexibility, including a flexible load balancer.

Oracle announced new load balancing capabilities for its public cloud on Dec. 8 as part of a broader effort to make its infrastructure-as-a-service (IaaS) platform more flexible for users.

"The promise of cloud has always been paying for what you need, but customers continue to over-provision in the cloud due to complex configuration methods," Vithal Shirodkar, senior vice president at Oracle, explained in a briefing with press and analysts.

What Oracle is attempting to do with its flexible public cloud infrastructure strategy is provide an elastic service that will automatically scale up or down as needed, Shirodkar said.

Over the course of 2020, Oracle has been incrementally adding flexibility options across its public cloud infrastructure.

"Our vision is to make our infrastructure truly flexible so that you can reduce costs by matching consumption to demand," Shirodkar said. "We feel that the term 'elastic' should really mean something that changes automatically, expanding and contracting in response to your changing demands."

Earlier this year, Oracle launched the flexible compute instance type, which provides the flexibility to independently select the number of CPUs and the amount of memory used, according to Shirodkar.

"Now the CPU and memory selection can be modified after instance launch, enabling you to optimize memory to core ratios," he said.

Cloud storage has also benefited from Oracle's flexible infrastructure efforts. Also in 2020, Oracle announced block storage volumes with dynamic and on-demand performance. As part of that effort, Oracle has enabled auto-tuning for block storage. Shirodkar explained that with the first phase of auto-tuning, there is automatic monitoring and adjustment of storage volumes.

"When you enable this feature for your storage volumes, we monitor that and we switch the volume to lower-cost performance options automatically when it's detached," he said.

The newest piece of Oracle's flexible infrastructure effort is the load balancer.

"Our goal is to provide customers with fast and responsive scaling and to enable them to pay for what they use," he said.

The Flexible Cloud Future at Oracle

Among the future enhancements are higher performance block storage volumes with finer granularity of control. For compute, Oracle will offer subcore virtual machines that will enable users to use only part of a compute core, with the ability to burst to full-core capacity as needed.

"Also, we're going to support auto-scaling the virtual machines based on a schedule or on metrics, so you could decide what you want to scale on and then we'll automatically tune the virtual machines, both in terms of cores and memory," Shirodkar said.

Finally, the new flexible load balancer will be getting an update in the coming months to support what Shirodkar referred to as "unlimited bandwidth," enabling users to go beyond the current top end of 8 gigabits.

"All of these features are being launched, and they contribute to a vision of providing a truly flexible infrastructure using very easy to understand and simple controls," he said.