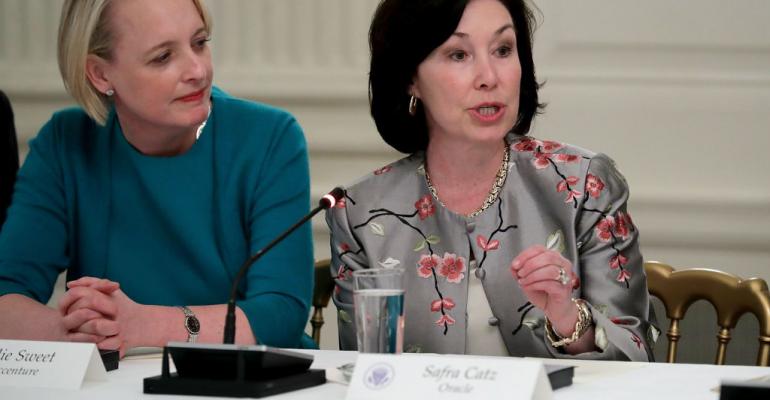 WASHINGTON, DC - JUNE 19: Accenture CEO Julie Sweet (L) and Oracle Co-CEO Safra Catz participate in a meeting of the White House American Technology Council in the State Dining Room of the White House June 19, 2017 in Washington, DC. According to the White House, the council's goal is "to explore how to transform and modernize government information technology." (Photo by Chip Somodevilla/Getty Images)
Cloud Computing>Hybrid Cloud

(Bloomberg) --Oracle Corp. chief executive Safra Catz criticized the bidding process for a huge Pentagon cloud computing contract in a private dinner with President Donald Trump on Tuesday, complaining that it seemed designed for Amazon.com Inc. to win, according to people familiar with the matter.

Trump heard her out and said he wants the contract competition to be fair, but made no indication he’d interfere in the bidding, the people said. Oracle, where Catz shares the CEO title with Mark Hurd, is competing with Amazon for the contract, a point she didn’t emphasize to Trump, the people said.

The president has repeatedly attacked Amazon and its chief executive, Jeff Bezos, and the multibillion dollar Defense Department contract for cloud computing services is a potential opportunity to hurt the company.

Trump invited venture capitalist Peter Thiel, a longtime supporter, to dine with him at the White House, and Thiel brought Catz as one of his guests.

“The president is not involved in the process,” Sanders said at her press briefing Wednesday, adding that the Defense Department “runs a competitive bidding process.”

The Pentagon intends to award a single contract for multiyear cloud services. The contract could go to one team made up of multiple companies. That plan has drawn criticism from lawmakers as well as Amazon competitors including Microsoft Corp., International Business Machines Corp. and industry groups that include Oracle. They’re worried the plan will favor Amazon, which is dominant in the cloud services market.

Pentagon officials said Amazon wasn’t pre-selected -- nor was any company.

“We have no favorites. We want the best solution for the department,” said Navy Commander Patrick Evans, a Pentagon spokesman.

The Defense Department has said it wants to shift to the cloud for a tactical edge on the battlefield and to modernize its technology infrastructure. A final request for proposals, which outlines a contract as long as 10 years, is scheduled to be released in May with an award by the end of September.

Amazon Web Services is Amazon’s fastest-growing and most profitable business, subsidizing its international e-commerce expansion and investments in video streaming and devices. Its profits help satisfy investors while Bezos pumps money into long-term initiatives that aren’t profitable. Amazon had operating income of $4.1 billion on sales of $178 billion in 2017, and it would have lost money without AWS.

Trump has repeatedly attacked Amazon in a series of tweets since March 29 that initially drove down the company’s market value by as much as $55 billion before Tuesday. He has not publicly mentioned the Defense Department contract.

But the president has repeatedly shown his willingness to publicly weigh in on Pentagon contracting decisions.

As president-elect, he criticized costs for Lockheed Martin Corp.’s F-35 fighter jet as “out of control” and let the CEO of rival Boeing Co. listen in on a call to the Air Force general managing the program. Defense Secretary Jim Mattis later agreed to conduct a study into developing an advanced version of Boeing’s older Super Hornet fighter as an alternative. No report was ever issued.

Trump eventually embraced the F-35, taking credit for reduced costs in a contract that already was under negotiation when he entered office.

He also asked Boeing to cut costs for new Air Force One planes and boasted of securing savings.

But he hasn’t yet sought to put his thumb on the scale in the middle of a contract competition, which would risk a lawsuit by a losing company protesting White House interference.

“We don’t do procurement by tweet. It doesn’t exist. The president actually has no say in the specific award of a contract,” said Stan Soloway, president of consulting firm Celero Strategies and a former Defense official under President Bill Clinton. “Any political interference at all would be illegal and inappropriate.”