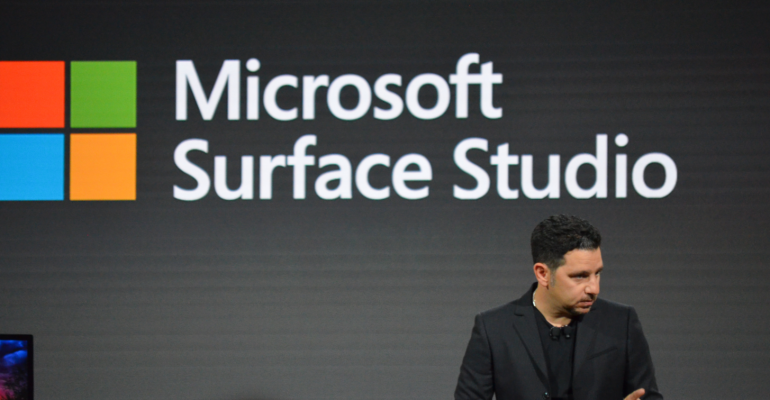 The Surface Dial also delivers a new interface experience that will appeal to many users.

Microsoft took the stage last Wednesday in New York City at their #MicrosoftEvent and announced the next Feature Update for Windows 10 as the Creators Update -- and they started what might be a new focus for each round of major updates for the 16 month old operating system.

We will need to wait to see if that is ultimately the case when the fourth major Windows 10 update comes out sometime in late summer/early fall of 2017 however, this Creators Update was the perfect match for the new hardware Microsoft unveiled this week and that was of course no coincidence.

The #MicrosoftEvent keynote started off with the software side of the house and how the Windows 10 Creators Update, expected to be released in the Spring of 2017, will allow everyone the opportunity to create with 3D, Xbox/Windows 10 gaming, and within the interactions they have with their family and close contacts.

There has been a lot of pent up energy leading up to this week's event within the Microsoft watcher/fan community but despite some leaked info leading up to it, most were unsure exactly what hardware we would hear about from the Redmond company.

Those answers were addressed when Panos Panay took the stage about halfway through the two hour keynote.

It was no accident that Panos garnered the largest segment of the keynote to just talk about Surface Studio and Surface Dial.

Panos has gained a bit of a rock star reputation ever since the launch of Surface RT when he helped launch Microsoft's first computer alongside of Steven Sinofsky. Soon after Sinofsky's departure from the company, Panay took over as the companies lead for creating devices in the Surface hardware line.

If he lived back in medieval times he would be know as the Surface Bard. He has a unique talent for winding a tale of discovery, innovation, and creativity that catches your attention and draws you in close and then he lands the punch line and your left in amazement.

The reason he is so good at talking about this hardware is because it is so clearly his passion on so many levels. That passion leads to him knowing every detail of the device from its conception on the drawing board to its manufacturing process and everything in between.

He started off by highlighting the team behind Surface, then shared a personal story about a Surface user who happened to be in attendance, demonstrating how over time, the Surface became the device for every part of the user's life.

The first new product announcement made by Panos was an update to the Surface Book which was originally released a little more than a year ago. This upgrade, officially known as the Surface Book With Performance Base, features upgraded internals that add faster performance, graphics and battery life.

Here are the specs:

In order to get the new processor and extra battery life into the device they re-engineered the thermal system by adding a second fan, hyperbolic cooling fins which moves are faster and quiter through the device and then they simply "put more batteries in the product" according to Panay to get the 16 hours of battery life.

Surface Book With Performance Base is available for pre-order now in three configurations and will be available on 10 November:

After the quick update for Surface Book it was on to the star of the show - Surface Studio.

Panos spent nearly 45 minutes waxing poetic about Surface Studio and its design, innovation, and performance as a tool for creation. I could truly not do it justice so make sure you check out the #MicrosoftEvent Keynote on-demand here and watch from 1 hour and 14 minutes forward to see the complete introduction of Surface Studio.

What really stands out for me is the display. If the eyes are the windows to your soul then the 28 inch PixelSense display on Surface Studio is the doorway to creativity. It is simply stunning to look at and so vibrant that you may not want to ever go back to another display. As I mentioned in my #MicrosoftEvent Showcase Highlights, I got some time with Surface Studio playing my favorite game Forza Horizon 3 and the graphics were honestly incomparable to what I get at home on my Xbox One console and those are awesome as well.

The zero-gravity hinge on Surface Studio for the display is one of its innovations that allows the monitor to be upright like a standard desktop or laid down at a 20 degree angle and become a natural canvas for using Surface Pen, touch and Surface Dial. By the way, zero-gravity means zero-gravity because it takes barely any effort to move the screen up and down despite the fact it weighs 13 pounds itself.

He dished on some of the specs but Panos never spends a lot of time on those details because he believes a device is more about how you use it and not how fast it can do the processing work however, that does not mean Surface Studio has skimped on the specs and available ports (423KB PDF file with specs from Microsoft).

The front facing 5MP camera runs at 1080p for HD video and it supports logging in with your face using Windows Hello.

Surface Studio comes in three configurations that can be pre-ordered now and they will be available on 15 December in limited quantities according to Microsoft:

By the way, starting today every Microsoft Store will have the Surface Studio on display and ready for you to go in and check it out. So if you lucky enough to be located near one of these stores head in and check the device out for yourself and then let us know in the comments what you thought.

So the next and last hardware device to be highlighted on the keynote stage by Panos was the $99 Surface Dial. It also happened to be the smallest device on stage as well.

This small cylinder is nothing much to write home but it does carry the familiar Surface magnesium color with its aluminum casing but inside it houses a couple of AAA batteries that can power it for about 12 months when used an average of four hours per day. It is wired up with a Bluetooth Low Energy radio that can be paired with any Windows 10 Anniversary Update based system that also supports Bluetooth LE. That means it is compatible with other devices in the Surface Line including Surface Pro 3, Surface Pro 4, Surface Book and of course Surface Studio.

Once paired it becomes a dial for you to interact with radial menus in supported apps on Windows 10 Anniversary Update and beyond. It includes a button click to make menu selections and haptic feedback to let you know it is seeing menu items on the device.

I watched a couple of different artists use Surface Studio paired with Surface Dial and Surface Pen during the Showcase. The devices just seemed to be extensions of their own hands. The operation of Surface Dial to either select a pen style, colors, or to manipulate images was amazing to see in action. You can get a good sense of it in the Introducing Microsoft Surface Studio video.

It is also compatible with the following apps but this list should grow as more developers enable the Surface Dial capabilities in their own Universal Windows Platform (UWP) apps:

What did you think of Surface Studio and Microsoft's other announcements from the #MicrosoftEvent?