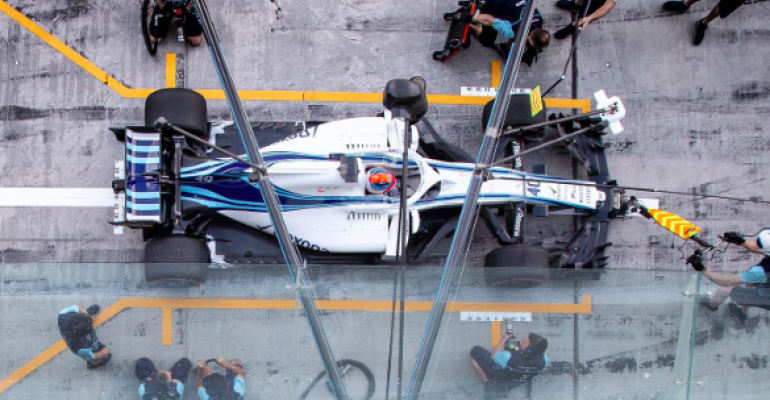 Fast. Safe. Reliable. Together, these words are a pretty good description of everything a world-class race car aims to be. They are also an apt description of a data storage strategy that keeps an innovative race car company in the game.

Williams Racing, a decades-old company with one of the world’s leading Formula 1 race teams, knows this well. The company has made its reputation by building and continually refining its top-notch race cars, and then fine-tuning a car’s details on the fly at the racetrack based on technical data. It’s the process Williams Racing uses to be as competitive as possible, given current conditions and opponents.

“We need a wide range of data at all times—aerodynamics data, wind tunnel data using computational flow dynamics, telemetry data from the car that we use to make decisions about performance or reliability for strategy, and video data for vehicle analysis of both our own cars and the competition’s vehicles,” explains Graeme Hackland, CIO of Williams Racing.” “We’re constantly redesigning the car after every race, and continuous access to our data is critical to that process.”

The challenge, Hackland says, is that the data it relies on so much has grown by 40 percent during the past several years. especially in the area of HD video and video analytics. Other major growth areas include manufacturing, design and aerodynamic data.

Data growth has been so swift that the company’s traditional tiered strategy, which included keeping three years of data on disk and older data on tape using NDMP (Network Data Management Protocol), simply couldn’t keep up. Traditionally, it has been important to keep as much data as possible so engineers could compare data sets in real time and decision-makers could access design or rule data from decades ago. Yet with the process Williams Racing was using, which included three safes holding hundreds of terabytes of data on tape, it simply wasn’t possible.

“We even forced our aerodynamics guys to delete some of their data,” Hackland added. “And there were times when we needed to recover data from tape, but it took so long that by the time we got the data back the user didn’t need it anymore.”

It got to the point where some backups never even finished.

“I remember saying about a decade ago that we had solved the backup window issue with tiered storage, but as data grew in ways we never expected, we got back to the point where we couldn’t back up all of our systems and data within a reasonable backup window.”

Other things have changed during the last decade, as well. Today, many of Williams Racing’s employees don’t work a standard 9-6 day. Instead, they may need to access data at any time, from any device. Hackland realized that the existing tape library needed to be replaced, and he knew keeping everything onsite was a really bad idea for disaster recovery. He had been pushing Williams down the cloud path in other areas, and he knew that a cloud-based approach would also be the best for backup and recovery.

“Ultimately, we wanted the safety of having the data off of our site but always accessible,” he said. “We can’t be slowed down by the internet links. We can’t risk not meeting a backup window because we don’t have enough bandwidth. And we needed a really low-maintenance, efficient solution, because we have a very small group of IT people, some of whom travel with race team.”

After a false start with one cloud backup vendor that ended up being too expensive and too slow, Hackland started researching other vendors. He considered and rejected Microsoft because of a fear of vendor lock-in, since the company has standardized on Office 365 and Sharepoint.

He then learned about Acronis, which already works with other motor sports and football teams. Acronis’ hybrid cloud storage solution was able to protect all of Williams Martini Racing’s data and applications, both on premise and in the cloud. That includes protecting hundreds of servers and workstations, Microsoft Office 365 and Sharepoint accounts, employee laptops, and hundreds of terabytes of data.

The way Acronis approached security was also a major point in its favor, especially since the company had already experienced one ransomware attack.

“I’ve always worried that if a piece of ransomware got onto our network that we didn’t know about, it could set about encrypting files without our knowledge—corrupt files that we would then backup,” he said.

Because of this, Hackland was looking for an extremely secure solution. The Acronis solution encrypts data both in transit and at rest, and Williams has the only encryption key. It also uses artificial intelligence to detect, remediate and recover from ransomware attacks, as well as blockchain-based data authentication.

Today, Hackland isn’t as concerned about meeting backup and recovery objectives, even though data stores are expected to grow to several petabytes over the next several years. He says it now takes just a few minutes to complete a backup, and users can recover files at a much more granular level.

“We’ve gotten it to the level where users can restore an individual email from their mailbox,” he explained. “Before, we had to restore the whole mailbox. And users restore their own emails or SharePoint file without involving an IT staff member.”

Now that the company is set with a secure cloud-based backup and recovery framework, it’s ready for the next chapter in racing—artificial intelligence.

“Artificial intelligence is a great technology for improving race strategy, but to use it effectively, you have to be sure the data hasn’t been tampered with, and you have to make sure the data is in the right hands at the right time to make the right decisions. A sound backup and recovery strategy is key to that process.”