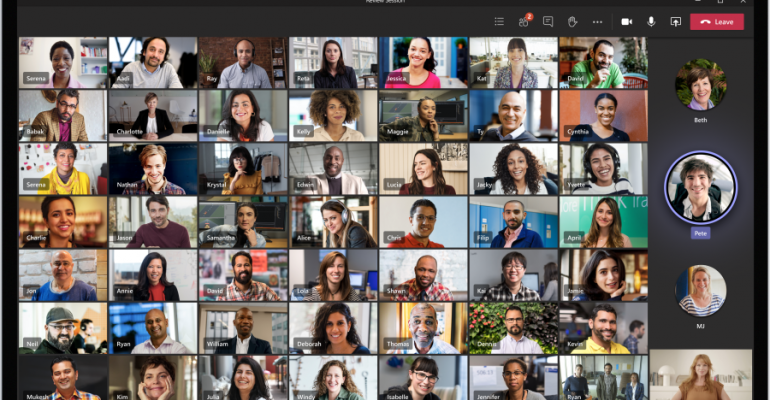 With new updates meant to improve meeting experiences and workflow management, Microsoft’s Teams continues its play to replace the user desktop with a collaborative task-and-communications hub.

The shift away from the user desktop paradigm is ramping up, as evidenced by the latest batch of Microsoft Teams features.

Microsoft's past product innovations have focused on tools that help workers optimize their time management practices and center their workflow around a collaborative hub. In 2018, it took aim at "context switching," or the practice of moving from application to application in order to execute a complex task. It did this by introducing the ability to complete one application's workflow within another application's workspace, such as editing a spreadsheet within an Outlook message. Teams was the lucky beneficiary of a lot of these pushes, with users encouraged to share files (formerly the province of Sharepoint or Outlook) or edit them (formerly confined to Office apps) in the shared workspace.

Positioning Teams as a collaborative workflow hub was a first step toward breaking out of the desktop-as-computing-workplace metaphor. The company has continued to pour attention into Teams as the workplace's starting point, making it the "single pane of glass" for low-code/no-code app development and review among colleagues and allowing administrators the ability to standardize channel set-up or customize the set-ups with different templates.

Now, owed to the rise of remote work in the wake of the global COVID-19 pandemic, the company has added a slew of new Microsoft Teams features and software tweaks that continue computing's shift away from a desktop and toward a collaborative task-and-communications hub.

Teams Continues Its Push to Be Your Single Pane of Glass

Microsoft announced the following Microsoft Teams features and updates that will make the platform both a collaborative hub and the centralized workflow hub for its users:

The Task app in Teams provides a new unified view of tasks that are pulled from Microsoft's To Do, Planner and Outlook. Smart lists like "Assigned to me" bring tasks together across different shared plans and facilitate shared project management.

Cortana will be pressed into service as a voice-cued assistant for making a call, joining a meeting on Teams, sending chat messages and sharing files.

Gone are the days of sitting in a room with ten colleagues; a lot of workplaces are now spending time on collaborative hubs to coordinate communications and share resources.  Being “on” all day is tiring. Microsoft’s own research found the following:

Brainwave markers associated with overwork and stress are significantly higher in video meetings than non-meeting work like writing emails. Further, due to high levels of sustained concentration, fatigue begins to set in 30-40 minutes into a meeting. Looking at days filled with video meetings, stress begins to set in at about two hours into the day. The research suggests several factors lead to this sense of meeting fatigue: having to focus continuously on the screen to extract relevant information and stay engaged; reduced non-verbal cues that help you read the room or know whose turn it is to talk; and screensharing with very little view of the people you are interacting with.

Together mode uses AI segmentation technology to digitally place participants in a shared background, thus reducing distraction from competing backgrounds and promoting the sense of a shared space for meeting inhabitants. By eliminating background distraction, Microsoft says, Team users will be able to "focus on other people’s faces and body language," thus "making it easier to pick up on the nonverbal cues that are so important to human interaction."

These Teams features, designed to boost engagement among meeting participants, are intended for brainstorming or roundtable sessions where multiple people may be talking and participants will want to track who's speaking when.

Microsoft is also rolling out speaker attribution and translation for live captions and transcripts later this year. This will give users a way to follow along with what is being said in a meeting. After the meeting, the transcript will be available in the meeting's associated chat window.

Together mode with auditorium view is rolling out now and will be generally available in August.

Two other tools Microsoft is adding to Teams to facilitate dialogue and communication are the Live reactions feature, which will allow users to share a sentiment about the speaker's comments via emoji, and the Chat bubbles feature, which allows the chats sent during a Teams meeting to surface on the screens of all meeting participants instead of living in a pane that's not always visible during the meeting.

This mode also includes Microsoft's large gallery view (rolling out in August 2020), where participants can see video of up to 49 people in a meeting simultaneously, and virtual breakout rooms, which allow meeting organizers to split meeting participants into smaller groups.

(It's worth noting that "breakout rooms" have been available in Zoom for months. There, a Zoom meeting host can choose to split a meeting's participants separate sessions automatically or manually – or pre-assign participants to different breakout rooms ahead of the meeting – and the host can switch between sessions at any time.)

Reflect messaging is a Teams extension aimed at promoting improved social relations in the Teams environment by providing the option for team leaders or educators to ask check-in questions and poll responses. This will allow groups to keep tabs on workplace well-being – a metric Microsoft says is vital in helping employees do focused work.

Another messaging feature, suggested replies in Teams chat, uses predictive AI to serve a few context-appropriate responses in reply to previous chat messages. This Microsoft Teams feature is a lot like Google's predictive replies in Gmail and it will be rolling out in July.