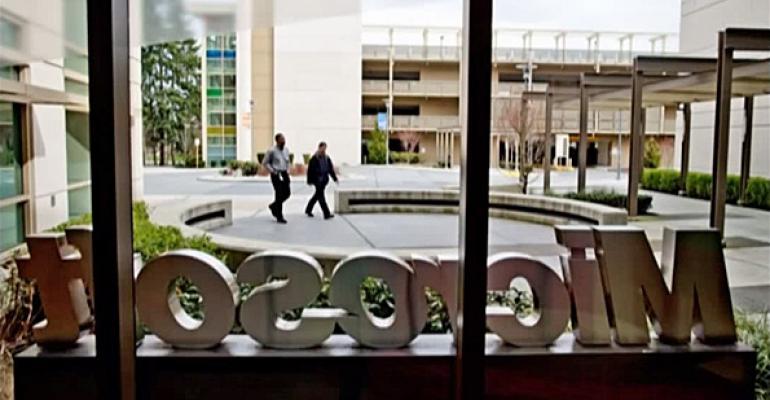 An often irreverent look at this week's other news, including Satya Nadell's big payday, the end of the WOOK dream, an interesting legal gambit from Apple in iPod case, more info about the Sony hack, Sprint's on-again off-again relationship with Windows Phone, Apple's new campus, and Samsung heads back to court in attempt to reduce that $930 million damages payout.

Microsoft CEO Satya Nadella is officially the second highest-paid CEO in the world after Apple's Tim Cook: Microsoft shareholders this week approved Mr. Nadella's $84 million pay package even though an investor advisory group said the company was paying him too much. The measure passed with 72 percent of shareholders approving the pay level, just north of the 70 percent level that would have triggered a policy review. I'm kind of mixed on this issue. I don't think anyone needs or even deserves that level of pay for anything, frankly. And at the very least, someone who is paid that much needs to be held to a higher standard. So far, the Nadella ship seems to navigating the murky waters of our industry relatively well. Let's see how next year shapes up.

And now you know the real reason for "zero dollar" Windows licensing: You need to get those customers when they're young.

Though as I noted in NOOK - Microsoft, the reality is that this partnership died as far back as March, when Barnes & Noble was able to wiggle out of an agreement to keep making its NOOK app for Windows, and decided to cancel plans for a Windows Phone app. Then of course Barnes & Noble partnered with Samsung to make NOOK-branded Android tablets. Microsoft, for its part, saw NOOK as a chance to even the score against digital media ecosystems from Apple and Google, which both offer e-book offerings. But after a $1 billion NOOK buyout fell apart, it's been downhill ever since. Ah well, a WOOK—a Windows-based NOOK—would have been very interesting. But now it will never happen.

But just wait until you see Facebook's next app. It's called Soylent.

Apple presented evidence in its iPod antitrust case this week that shows that one of the two original plaintiffs in the case—a woman from New Jersey—didn't even own an iPod during the period of time in which the case covers. According to Apple, the women's iPods all date from July 2009 or newer, and since the case covers iPods purchased between September 2006 and March 2009, she couldn't possibly have been impacted by the alleged wrongdoing. Given how fickle the law can be, I'm curious to see what happens here. On the one hand, millions of people were obviously impacted by Apple's anti-competitive behavior. On the other, if Apple is right, then this woman can't be the basis for a case against them. But since I've owned every single iPod ever made, I would like to step up and take her place. Someone has to rise to the occasion.

"Apple didn't really get started in a garage"

Co-founder Steve Wozniak now admits it all happened from his desk at Hewlett-Packard. Which makes HP look even dumber than usual, frankly.

Sony hack involved the personal data of many celebrities

It will probably be months before we know the full scope of the recent Sony hack, but details seem to be emerging every day. This week, we learned that hackers gained access to the social security numbers for about 47,000 Sony employees and some major celebrities too. Among those affected are actors Sylvester Stallone, Judd Apatow and Rebel Wilson, according to reports, though I guess all you need is a BitTorrent client to go find this information for yourself. Again, I'd like to reiterate the obvious: This is all James Franco's fault.

"Google to launch kid-friendly versions of Chrome, YouTube, others in 2015"

Define kid-friendly. Less-intrusive ads? No usage of stolen personal data until they turn 16?

The Windows Phone community was likely unsurprised this week to learn that Sprint, the nation's most terriblest (yes, terriblest) wireless carrier had quietly dropped whatever outdated Windows Phone handset(s) it had been selling from its web store. But after being asked about this by Windows Central, Sprint told them that it expects "to bring new Windows Phone devices to our customers in the near future, and Sprint is committed to offering a variety of operating systems to our customers." We already sort of knew that was coming, however: As I reported last week in Windows Phone Stats: November 2014, the Windows Phone usage trackers at AdDuplex had already spotted a coming Sprint-based Windows Phone in the wild, though it is sadly a low-end 480 x 854 device. As with all things Sprint, don't set your sights too high.

First Clippy, now Clip Art. When will the madness end?

Apple's new campus will be a Mecca for the non-religious

Apple's in-progress $5 billion campus is a monument to the excesses of the company, its customers, and the country in which it was founded, and we learned this week that it will house, among other things, a $74 million gym facility and a $161 million auditorium. What this reminds me of is the TD Banknorth Garden in Boston, or whatever we're calling it this year. In the 1980's, the Boston Celtics were one of two dominant NBA teams—along with the LA Lakers—that together rejuvenated the league and took it to all-new heights, leading to the subsequent Jordan, Kobe, and Lebron eras. For Boston, it meant that they could replace the aging and inhospitable Boston Garden with a sterile and generic new arena that celebrated the past, mostly since the present—from about 1992 through 2007—was so freaking terrible. On that note, here's to the next 15 years for Apple. I'm sure that spaceship-looking thing will never seem silly to anyone.

This is how you know you're in trouble these days: Yahoo is doing better at something than you are.

Samsung and Apple were back in court this week, this time an appellate court in which Samsung is arguing that the $930 million a federal jury awarded to Apple is too high. Samsung, as you may recall, brazenly ripped off the design of Apple's iPhone and iPad in its own phones and tablets, and while some may take some degree of glee in such an event, it's apparently illegal. So Apple was awarded $930 million in damages in the initial trial, an amount Samsung has always claimed was incommensurate with the crime. In court this week, Samsung in particular highlighted one portion of the jury award—at a value of $382 million—that claimed that the firm copied Apple's iPhone design. And that may be worth examining, since Samsung's phones in question didn't really resemble the iPhone physically. At this point, it's all about saving face, I think, and even if Samsung is able to reduce that award somewhat, it can declare victory, like forcing a football team to kick a field goal instead of allowing a touchdown.