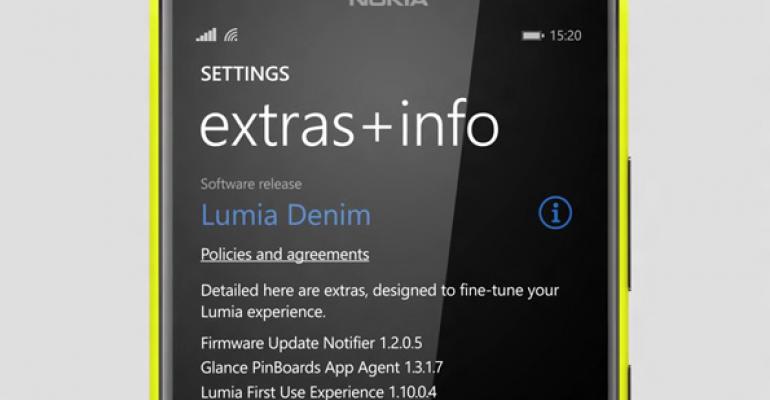 Ignore if you're on Verizon, of course

Denim is already available on the newer Nokia and Microsoft Lumia handsets and it ships alongside Windows Phone 8.1 Update 1. I see it on the Lumia 735, 830, 535 and 530, for example. But if you're using some other Windows Phone 8.1-based Lumia handset, you could potentially get Lumia Denim in the coming weeks. Or months. Or never: You know how it goes.

Indeed, it is sort of amazing that Microsoft would actually create a video called How to update to Lumia Denim given how unlikely it is that any of us will actually get this update any day soon. And given that many of us will never get it, period. Why they can't just make the Lumia firmware updates part of the Developer Preview program is unclear to me.

According to that video, the latest (firmware) update for your (Lumia) phone is called Lumia Denim. It will include "the latest fixes and improvements," such as folders on the Start screen (which is actually part of Windows Phone 8.1 Update 1) and "customizable snooze times for your alarms." Seriously, that's the extent of the new features mentioned in the video, though there is a rundown of updated Lumia apps—mostly unrelated to Denim—as well. Lumia Camera will support 4K video recording, and there's an updated Glance screen (available now to any Lumia/8.1 user).

You'll need at least 1 GB of free space on your phone to install Denim, but since you'll have between some number of months and infinity to prepare, there's no need to rush making space.

Yes, it's hard not to get frustrated with this stuff.

If you have the intestinal fortitude, head on over to the Software Update for Lumia with Windows Phone 8 web site and see what's going to happen. Eventually.

But I think the grating narrator of the video has the right idea. "Wait patiently," she intones at one point. We're trying. Really, we are.