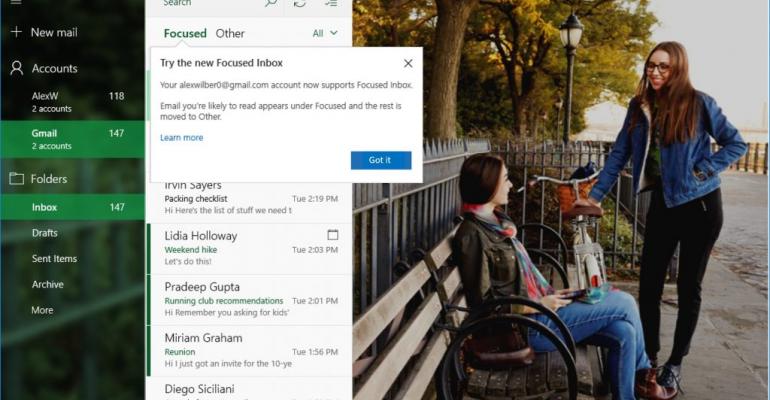 Google and Microsoft are embracing the idea that task management relies on communication, a lot of our task-based communication takes place in corporate email inboxes -- so why not use a workplace communication tool to complete those tasks?

Email as a real-time to-do list is not a new idea -- and it's one that's met with some resistance by productivity experts. But Google and Microsoft are embracing the idea that task management relies on communication, a lot of our task-based communication takes place over email -- so why not use a workplace communication tool to complete those tasks? And for both companies, it's a no-brainer to use artificial intelligence to streamline or complete those tasks originating in corporate email inboxes.

At Google I/O, the company announced an extension to its Smart Reply feature -- that row of buttons at the bottom of messages allowing you to quickly tap and send contextually-appropriate responses like "Sounds great, thanks!"  -- that will suggest complete sentences within the body of an email message. The suggestions will pop up as users type, and all someone has to do to incorporate the suggestion is hit the tab key. Google's Smart Compose feature will also feature context-sensitivity closings ("Have a great weekend" for messages you're sending on a Friday, for example). The Smart Compose feature will roll out to consumers and G Suite customers "over the next few months," the company says, and it requires users to enable the new Gmail to use it.

If you're all, "Enable the new what now?" remember that Google rolled out a redesign of its email service in late April 2018, with features aimed at wooing enterprise customers to pay for G Suite.

(While Gmail has an estimated 1.2 billion users, the G Suite productivity service the company sells has only 4 million paying business users. By contrast, Microsoft has 120 million Office 365 subscribers using Outlook.)

Related: Google Grapples With 'Horrifying' Reaction to Its Uncanny AI

The new, business-friendly features included in the Gmail redesign in April included:

Google was quick to tout artificial intelligence as fueling some of these context-dependent features and productivity-boosting reminders. It's a claim Microsoft's also been making. For the last three years at Ignite, it's been demonstrating how machine learning can help Outlook users refine their email interactions and coordinate meetings. It's also been positioning email as the primary workspace for task-oriented workflows: the Actionable Messages feature it rolled out last year let users complete tasks like paying invoices or assigning tasks within project-management services Teamwork.com and Wrike.

At its Build 2018 developer conference (held the same time as Google I/O), Microsoft unrolled enhancements to the Actionable Messages feature and emphasized, "these capabilities allow developers to engage with their users more deeply, right in context within the email, thereby reducing the friction between intent and action."

The two features announced to reduce the friction are: An Adaptive Card layout format designed to make integrating tasks into Outlook more visually appealing -- there are samples of this card format presenting actionable items like handling a GitHub notification; and a streamlined payments feature powered by Microsoft Pay.