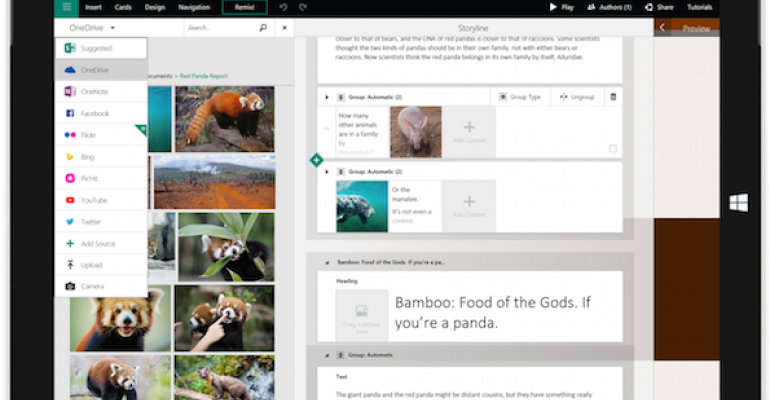 The biggest news in Office 2016 is not going to be the ability to make six new charts in Excel — although if you're a really big fan of histograms, this might well be the biggest news for you. Instead, it's that this is a set of software tools that intends to shift your mindset when it comes to how you work.

For years, we've always evaluated new Office releases based on the number of new features and user interface changes. And I think that as the industry matures, as we make this transition from personal productivity to team productivity, the way to look at it is, 'How many new scenarios are we talking? What are the new things we can do?'

What follows is the Windows Supersite interview with Villaron. It has been edited for length.

Q. What kind of user data or data did you get to determine the types of collaboration that people found helpful, as opposed to the stuff they might find frustrating or intrusive?

A. The best example I would talk about is in PowerPoint. If you take a look at PowerPoint 2013, when you get a Merge Conflict, there's a rather complicated UI where we give you ultimate control [over resolving the conflict]. We did that because, technically, we could, and we wanted to give all the power to our customers. And the feedback we got through customer visits showed us that we gave them too much power. So in 2016, you're going to find a very simplified conflict-resolution UI in PowerPoint. What we learned is customers don't want all that control.

Q. So when your team sat down and mapped out 'This is how people are going to work together,' you used user feedback from previous iterations of Office, figured out how the tools would work, then went back and got more customer feedback?

A. We brought customers in for customer usability tests, we watched them — it's also really important to note that we are really ardent dogfooders, and so you can imagine all of the executive presentations that happen at Microsoft. We build thousands of presentations and so we get a bunch of really rich feedback.

Q. So you're looking at workflow as attaching all the data to a specific user and not just a device or platform?

Q. From a soft-skills perspective … what sort of skills are people going to have to cultivate? What sort of workplace approaches will people have to adopt in order to get the most out of these tools?

A. What it really comes down to is a mindset that states, when we transition from personal productivity to team productivity, the individual within the team becomes less important. People start to understand 'I get better results if I partner with my team members. I don't have to figure out the answer at the end. I can pull people in early.

When we go and we talk to customers, it is a generational thing. The younger folks that we talk to, they get it. They assume everything is public. New folks are coming in and they're sharing that [team productivity] is the way they expect to work.

The analogy I would bring is, internally, we've switched from a 3-year release cycle in Office to monthly releases, and that was sort of an emotional thing for us to figure out — Can we do it? We don't have all the answers. We're just going to have to take a leap of faith and figure it out. And I think it's the same thing with working with others in a team environment. Trust that the team has a shared goal. And everyone is trying to make everyone else better, and that's where social norms come in.

Q. Are there going to be any tool tips or user guides that suggest to the users how to share with other people? Reminders that pop up to note who you have a sharing relationship with?

A.  That's a great segue into Delve — it's really about generating opportunities for insights. I run two teams, a team in California and a team in Washington. The team in California runs PowerPoint, my guys in Redmond do the graphics. As you can imagine, there's a lot of overlap between graphics and PowerPoint. I had this case where I was on Delve the other day, I realized that one of my program managers in California was working on inking capabilities, and one of my other program managers in Redmond was working on inking capabilities, and it was only because Delve surfaced this information that I was able to put them together and say, 'Hey, guys, let's not run at cross-purpose.' We're going to see more and more of those, and that's going to incentivize people to say, 'Let's just let people see what I'm working on.'

Q. Delve also helps you build a more accurate record of what everyone's working on and who they're communicating with. That's a pretty powerful management tool.

A. And that's a great segue into Groups. One of the things we did when we did a bunch of research, we identified three patterns in the way people work. There's a pattern when an individual creates a document and they're done. There's a second pattern where you create with a group of people — we put a document together and then we're done. And then there's a third pattern where there's a group of people who make a series of documents over time. That warranted a new concept called a Group, where you can associate people with a Group, that Group can contain shared conversations, a shared location for documents and we know groups are incredibly dynamic, people come and go, so you want to have one place that's resilient for the team to come to, regardless of who's coming and going.

Q. Sort of like a bar where everybody knows your name?

Q. So, using something like Groups or Delve, can you finally avoid those long email chains where people get brought in after four emails and ask to get caught up, and then thirty emails later, you've almost reached consensus, there have been eight different attachments amended twice …?

A. Groups is where I'd start because it allows people to join the conversations late and they have one place where they can see all of the conversations that have happened already. So they can jump right in. I also want to mention modern attachments, which live in the cloud and can be managed locally. We've been dogfooding that for a year, and it cuts down on mailbox size, it cuts down re-attaching things after they've been amended. I would say more than any other feature, this one has changed our internal workflow at the company.

Q. What happens when someone leaves a Group? Do they lose access to work they may have collaborated on?

A. The Group is tied to a particular identity. You still have access to it unless someone proactively removes you.

Q. How do people learn about data protection technologies [that let them download or prohibit downloading, files], other than being remarkably paranoid and looking for those themselves?

A. I think we're going to have to look at finding ways to take these incredibly important and powerful features and share them with everyone.

Q. When you store things in the cloud, is there a checklist or reminder people can have before they go offline? What are the productivity provisions in place for when you don't have constant connectivity?

A. I think there's a lot of opportunity to improve the notifications aspect of cloud-based documents. I can tell you that we do try to be as smart as possible about your [Most Recently Used files]. If you have opened up a document from the cloud, we cache it in what we call the Office Document Cache. So if you happen to then boot Word when you're [offline], go to your MRU and choose that document. We will open up that copy in your local cache. You'll be able to edit that document and we'll write those changes to the document cache. The next opportunity that you are online, we will try and upload your copy to the server copy. Then we'll try to reconcile everything.

Q. You've talked about relationships with customers and I do want to get back to the culture clash for just a minute. In order to foster adoption [of Office 2016] among a wide audience, is this just something where you're going to count on users slowly recruiting each other because they work better? Or are you planning an aggressive outreach? You're basically suggesting people are going to have to shift their minds from 'you own your work' to 'your work is part of a bigger whole.' How are you helping customers make this shift in mindset?

A. It's all about giving them examples of how more modern productivity and team documents can work. If you take a look at Sway, you can look at it as a proxy for how we're going to evolve the business going forward. Sway is an application where you do collaboration from the ground up, it's designed to be on the Web, it's designed to be shared, it's really sort of the more modern way of communicating. I think when people look at Sway, they can look at Microsoft sort of moving everybody in this direction. The virality of showing people there are better ways of doing things is really important. Social and sharing really are the foundation of the future.

There are so many advantages to working in the open — not to hold people back and not to build walls. They'll be more efficient, they'll make better decisions, they'll work faster. They'll have better business impact.