This topic provides news and insights around software as a service (SaaS) applications and best practices. 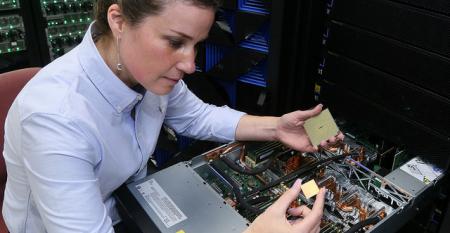 Google Launches IBM Power Systems as a Cloud Service
Jan 15, 2020
The service is aimed at legacy enterprise workloads. Google is the second major cloud provider to offer the option besides IBM.

Capital One to Shut Down Its Last Three Data Centers Next Year
Dec 11, 2019
Pushing against the hybrid-cloud narrative, the bank is ‘all-in on public cloud.’

Microsoft’s JEDI Win May Open ‘Floodgates’ For Cloud Growth
Oct 28, 2019
Analysts wrote that while the dollar-amount of the deal made it “inconsequential” for Microsoft’s near-term results, it still represented a milestone for its fast-growing cloud business.

Microsoft at Record High on Controversial Pentagon Contract
Oct 28, 2019
The $10 billion cloud contract -- unthinkable for Microsoft even a year ago -- will likely come at a cost, both legally and internally.

HP Enterprise Gives Upbeat Profit Forecast as Cost Cuts Continue
Oct 24, 2019
HPE CEO Antonio Neri is tying to increase sales by moving the company to a subscription business model. By 2022, all HPE hardware and software will be available as a service or via a pay-per-use model.

Microsoft-Mover Deal Helps Enterprises Migrating into Cloud
Oct 23, 2019
The business reality for many industries is that more data is migrating into cloud services and storage options from on...

Mark Hurd, Oracle CEO Who Led Three Tech Companies, Dies
Oct 18, 2019
Hurd was a key driver in Oracle’s turn from an old model of licensing software toward the use of cloud computing, a burgeoning business dominated by rivals Amazon.com Inc. and Microsoft Corp.

Is Cloud AI a Fad? The Shortcomings of Cloud Artificial Intelligence
Oct 16, 2019
Cloud artificial intelligence presents some challenges that other cloud-based offerings do not.

SAP’s an Old Company With New Tricks in Battle to Dominate Cloud
Oct 11, 2019
Cloud is the company’s clear growth engine -- with revenue increasing about 32% last year to about 5 billion euros -- but driving change at SAP has sometimes been controversial.
Load More