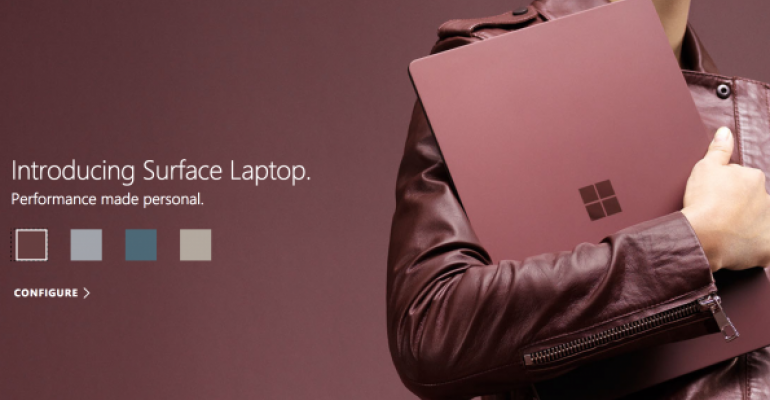 Does Microsoft's Answer to Rival Chromebook Miss the Point?

(Bloomberg Gadfly) -- I believe the children are our future. I also believe Microsoft's revamped technology for schoolchildren is sending worrying signals about the company's future.

Microsoft Corp. on Tuesday announced new and revamped technologies aimed at education, including laptops made by the company and its partners. This is all Microsoft's counter-strike against Chromebooks, a line of stripped-down laptops with Google software that have swept through U.S. schools. Chromebooks were 58 percent of the laptops, tablets and other mobile computing devices shipped to U.S. K-12 schools in 2016, according to Futuresource Consulting.

Microsoft has dangerous weapons as it tries to one-up Alphabet Inc.'s Google in technology for education. The company has decades of experience with schools, and it talked Tuesday about its advantages including the wide range of software for Windows PCs. Microsoft also has fresh ideas for education, including allowing students to learn software coding using Minecraft, the building-blocks video game owned by Microsoft.

Microsoft might have something to offer to schools that is better than Chromebooks. But at times on Tuesday, Microsoft executives seem to have misunderstood the lessons of Google's technology takeover in education.

Chromebooks have found traction chiefly because there is nothing fancy about them. A Chromebook is essentially just a Web browser with a screen and a keyboard. It is simple to use for students and, more important, for the grown-up teachers and school administrators who can lock down what students can and can't do with the computers. Chromebooks work for education because they are no fuss.

Microsoft's message is it can do no-fuss technology for schools, too, but with more bells and whistles. If that sounds like a impossible combination, it probably is.

​Microsoft's message is odd because under CEO Satya Nadella, the company's technology is finally capable -- in principle -- of capitalizing on the "it just works" technology philosophy behind Chromebooks. Microsoft has made Windows easier to use and kept it constantly refreshed with new features and updates, just as smartphones and internet applications are.

At times, Microsoft's event on Tuesday felt like a regression to the bad old days when the company stressed superior features and functions of its software, not how it makes life easier for people.

It's hard not to see fear behind Microsoft's regressive strategy in education. At first glance, schools appear to be an unlikely battleground for three technology superpowers, including Apple.  Education isn't a lucrative market. Google hardly generates any revenue from schools or universities including from Chromebooks , which typically retail for a couple hundred dollars or so. Microsoft and Google offer their word-processing, presentation and spreadsheet software free to schools and students through college. Even with their success in U.S. schools, Chromebooks are a fraction of the roughly 435 million PCs and tablet computers sold globally each year.

But schools are about the future of technology. Every Chromebook in schools is a chance for Google to get young people hooked on Google's software and not on Microsoft's. Schools typically use Chromebooks to also access Gmail, word-processing software, spreadsheets and more. In universities, too, Google has made some headway in recent years with its alternative to Office, now called G Suite. Microsoft countered by refashioning its own school-oriented versions of Office.

If those schoolchildren and college students don't use Windows and (worse) Microsoft Office, the risk is they will never want to use the Microsoft software when they go to work. Office is by far Microsoft's biggest product by revenue, and companies buying Office for their workers generate the lion's share of Office's $24 billion in annual sales.

It's worth saying that Microsoft has always been in a dogfight in education technology, and it hasn't hurt its lock on software for work. Apple computers have been popular in schools for years, and yet when those children graduated they transitioned into Windows and Office for their jobs.

Times are different, though. It's easier than ever for people and companies to swap technologies, or mix-and-match their favorites instead of relying solely on old standbys like Microsoft. The Nadella-era of Microsoft knows this, even if executives ignored reality for a day. Microsoft has to embrace the idea that simplicity for many people -- schoolchildren, adults and corporations -- can be a virtue, not a mistake.